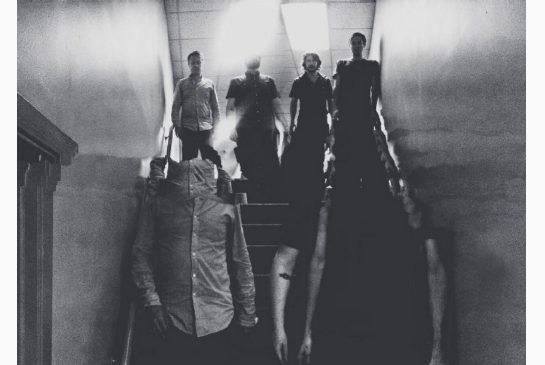 Mark Mullane knows what's up. The former frontman of Halifax's '90s phenomenon North of America got pals together last year and started Cryptorips, a semi-nostalgic return to the math-rock of his youth. After only a few shows, the band was exciting music nerds everywhere; in July, Cryptorips opened the Toronto reunion of '90s indie-shoegaze legends, The Swirlies. Not bad.

"Are we pumped? Yes, we are pumped," Mullane tells me. Especially because Cryptorips have only played one show in Halifax, "And that was a technical debacle, so we're excited to play from start to finish without breaking anything," he says. Since the release of two insane tracks in June, Mullane and the band (Holy Fuck's Matt McQuaid, Long Weekends' Adam Hartling and 'celebrity barber' Rob Oxner) have been recording new ones for a debut full-length. There's no doubt it'll channel Crypto's perfected 'angular' sound (note: 'angular' is one of the most-used words to describe anything slightly math-rock from the '90s and I think that I love it).

"I've always been drawn to dissonant, slightly obtuse but still rockin' rollin' tunes," Mullane says, when I ask about the appeal of complex music, "When I think of math-rock, I think of bands that play parts five times instead of four, or throw in some random time signatures here and there." He references distinct math-rock bands like Don Cab, Polvo, and Shellac, which were the bands he used to play on his CKDU radio show, and which led to the formation of North of America in '97.

"Math for the sake of math isn't appealing to me, but throwing in some razzmatazz here and there can be rewarding," Mullane says, "And a couple of [Cryptorips'] songs started out as North of America songs for an album we were recording back in 2010, so there's a bit of nostalgia but it's more about playing the music that comes naturally." A few years ago, he'd been writing pop songs for The Got to Get Got, and while he enjoyed it, "Loud atonal music is just more me," he says.

Coming from a different musical background, McQuaid (bass) says Cryptorips is a welcome complement to his work with Toronto-based electronic simulators Holy Fuck: "I like playing actual songs — albeit pretty weird ones — for a change, unlike in Holy Fuck, for the most part," says McQuaid, "Musically speaking, Mark exclusively uses weird guitar tunings, which is both challenging and freeing as a bass player." McQuaid is also pumped to see Viet Cong: "Big fan! And Graham (Walsh, from Holy Fuck) makes their records so I have that connection."

"We couldn't ask to be playing with better bands," says Mullane. Both Cryptorips and Viet Cong draw on '90s influences to create songs that feel familiar but new, and inviting but bludgeoning, too, and on top of that, both bands are powerful as fuck. "My old buddy and trained jazz musician Pete used to say, 'You gotta have a chain of sustained wows in every song,'" Mullane explains, "That stuck with me and if a song is too straight ahead, we just chuck in a 'wow' somewhere."

If you don't have a ticket to tonight's sold-out show, Cryptorips play Black Buffalo Records (5:30pm, free, 5576 Cornwallis Street) on Friday, and the Halifax Pop Explosion on Friday, October 23. Cross your fingeys for Viet Cong's Polaris nom. Prepare to be wowed.