Talk of the Townsend

Cape Breton darling Carmen Townsend has spent years devoted to music, from family dance contests to singing on stage with The Rheostatics. Get chills from this rising star. 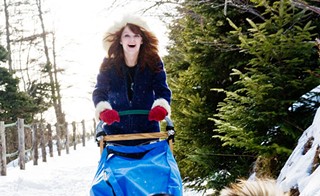 There are worse places to chase away mid-winter malaise than The Paragon Theatre on a Wednesday. The tables are laid with tea lights flickering like fireflies, the apricot beer is on special, and people lean their heads in to hear each other over the music thumping through the speakers.

It's Carmen Townsend's third time playing at the Halifax Music Club. Tonight she's on first. She steps onstage with her Guild acoustic-electric guitar and chirps into the microphone: "Hi, I'm Carmen from Cape Breton!" As the requisite regional cheers ring through the room, she launches into the first song, "Start All Over." She swings her guitar, bouncing on the toes of her boots and as her head nods assuredly to the music, her auburn bangs fall over her eyes. She strums with gusto. And then there is her voice. It slides and vibrates and sometimes it rushes like brook water running over rocks. She draws words like "marijuana" to their breaking point, her slow croon expanding to a full-on howl. The room is understandably rapt.

It is easy to see how she's been captivating people over the past few years, whether with The Shakey Deals, The Tom Fun Orchestra, during awards showcases (she went onstage at this year's Nova Scotia Music Week at 4am) and through a seemingly unstoppable gigging schedule. Her long-gestating album with The Shakey Deals is approaching its release, and will signify a major turn in her career. But none of it came easy.

Townsend grew up in Christmas Island, about 20 minutes outside of Sydney. She spent her formative years in a house her grandfather built on the edge of the woods. "I'm pretty much from the boonies," she says. "Right on the ocean." She was one of 16 students at her school. Her father worked in the fisheries and her mother was a homemaker who volunteered at the school. They let off steam through music. "We'd listen to records and have dance contests," Townsend says. "There was nothing else to do."

Townsend remembers sneaking out to her dad's car to listen to his eight-tracks. "I would pretend the tuning knobs were a piano, and the gearshift was a microphone," she says. Her education was classic rock: The Doors, Black Sabbath, Zeppelin. She sang along to Joni Mitchell's Blue with her mom and sister on Sunday nights, and she remembers her dad showing her Chuck Berry playing guitar on television. "That was a huge part of our relationship---we just shared music back and forth," Townsend says.

A turning point came when Townsend's sister started bringing her friends over. Many of them played guitar. And like many kids who came of musical age in the mid-'90s, Townsend eventually got turned on to grunge. She started picking the lock on her sister's bedroom door and stealing her tapes. Later, she'd sneak downstairs and watch her sister's male friends playing songs from Nevermind on their acoustics, and then she'd go back upstairs and try to learn the songs herself. She memorized where their fingers rested on the frets, teaching herself C and G chords and moving on from there. Not everyone was pleased with these developments.

"My sister thought I was trying to steal her boyfriends," she remembers. "But that's how I learned to play guitar."

By this point, Townsend's family was living in Sydney, and Townsend worked on overcoming her shyness by playing shows. She started singing and playing rhythm guitar in the band Q and began an arts degree at Dalhousie in 1995, missing the occasional exam so she could play a show. The day Blind Melon's lead singer Shannon Hoon died, Townsend decided she was done with school. The 19-year-old packed up and moved to Vancouver. There, she met a community of musicians from Cape Breton and Newfoundland and formed another band, Schenk, while working as an esthetician. Her bandmates began to push for a move to Toronto. Townsend didn't hesitate. "I jumped on a plane with a guitar and 400 bucks," she says.

Townsend spent five years in the city working as a waitress and in a government job, and continued playing music. One of her more notable experiences came when Toronto legends The Rheostatics asked her to do guest vocals on an album and join them onstage. "I thought to myself, if the Rheos are asking me to sing with them: 'Wake up, woman! I must be doing something right,'" she says.

Burnt out on her soul-sucking government job, Townsend ventured home to Cape Breton to form an ensemble of her own. "I had a vision of what I wanted, and something in my gut was saying, 'Quit this band, do your own thing,'" she explains. Within a week of returning home, Townsend had met drummer Shane O'Handley and bassist Thomas Allen---and that was that. "They're my best friends," Townsend says. "They know I'll never leave them."

Since their first explosive ECMA showcase in 2005, the trio has gigged heavily throughout the Maritimes and across Canada twice, dealing with catastrophic van breakdowns and increasingly frenetic schedules. During this time, Townsend was also working part-time as a teacher's assistant with her mother. Although she loved the job---and still speaks fondly of it---her schedule was grueling. "There would be times where I would play with Tom Fun until 2:30am, then get up in the morning and make breakfast for 30 kids, work one-on-one with a boy that was autistic, drive to Fredericton to play with my band, and then Tom Fun, and then drive home," she remembers.

Townsend's life took another sharp turn when her mother passed away from breast cancer. She continued as a teaching assistant, but it was clear to her students that something was missing. Townsend says the autistic boy that she tutored was particularly aware of her feelings.

"He didn't talk much, and it was obvious he was feeding off of my energy, I wasn't happy and feeling into it," she says. One day, the boy looked at Townsend. "You are happiness," he told her.

"I thought, 'Well, holy shit. I've got to get happy again,'" Townsend says.

At Christmas, she decided to leave the teaching position and move to Halifax in order to focus on music full-time. Currently, she says she's living out of her 2004 Toyota Corolla, but plans to find a place of her own within the month.

"Cape Breton is a beautiful place," she says, "but I feel really drawn to this city. Halifax has embraced me in a bear hug."

Onstage, Townsend is 10 feet tall---an indomitable Amazon. In person, she is small and slim and very sweet. But she also exudes a toughness that has never given way to bitterness, and this, coupled with her considerable abilities, has kept her afloat.

"My male bandmates say I have rock 'n' roll balls," she laughs. "I've always tried to get a little break anywhere I could. It's just always been my life."