Romy and Sari Lightman return to Halifax this weekend with their unrestricted, experimental and beautiful sound. 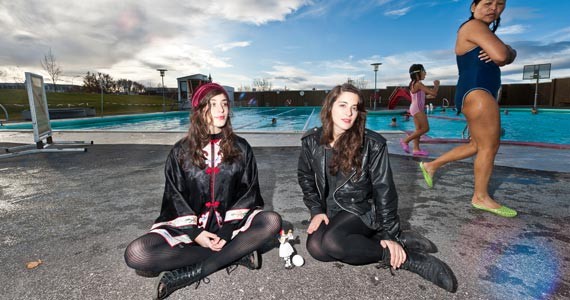 You might remember, if you were in Halifax between 2006 and 2010, being enchanted by the Lightman twins, Sari and Romy, facing each other on stage singing their Ghost Bees tunes in the midst of tea offerings and scent tinctures. Those were the early "vulnerable" days of their artistic birth, where identity and ancestry fixated their musical attention. Since those years touring as Ghost Bees both sisters returned to Toronto. For the last two-and-a-half years they've been on extensive world tour as backup singers and musical collaborators with the group Austra, an electronic band also based in Toronto. The gig provided the sisters with sought after opportunities to travel. They played with and found inspiration from Gossip and Timber Timbre. Yet they never lost sight of their creative purpose.

Despite the routine and regiment of being on the road, playing the same music from one show to the next, both sisters continued to grow as artists. Living modestly, they managed to maintain their own creative practice, seeking inspiration from literature and vagabond influences like the eccentric Moondog. "I have a lot of philosophies about what responsibilities an artist has," says Romy. Yet, recently she been "taking herself less seriously," describing their sound as "more upbeat than ever." But to the outsider it's clear that self-preservation is top of the list. Not only has the commitment to their work kept them in tact, it has significantly contributed to their artistic risk-taking and independence.

Regularly evading predetermined expectations, Ghost Bees changed names to Tasseomancy, most recently shortening the name to Tasseo. They connected with like-minded musicians and expanded the duo to include keyboardist player Johnny Spence and percussionist Evan Cartwright, both influenced and schooled in jazz improvisation. Their contribution makes for a fresh folk jazz fusion like nothing you have ever heard.

"This is the project where we don't have to play it safe," says Spence. "We want to make each performance unique." Willing to fail, the group dedicates itself to keeping open minds about their work and showing it without having any sense of audience response. "It takes bravery to say we'll try this thing because sometimes it totally doesn't work," says Spence. But more often than not the experimentation proves successful.

Maybe you've heard mandolins strumming, flutes fluttering, vibraphones reverberating, Rhodes echoing and deep drums, but not with the infusion of the Lightman sisters' distinct singing. "The two haunting voices is what first captures you," says Spence. But it's the product of their approach that will sustain your interest. The group reinforces each other in their shared determination to play with an open mind. They welcome adventurous performances like their three-and-a-half hour jam at the Royal Ontario Museum, during which they occupied the cavernous hall. Unrestricted to traditional song format the group experiments with rhythmic series, and builds structures that serve their lyrical and artistic content. Think catchy art music.Think melodic textured landscape.

The sisters have had but a handful of performances in the last few years. You may have seen them at the past Halifax Pop Explosion or last weekend at Sappy Fest. Otherwise their new material hasn't been heard. Being at the finishing stages of their third album, with some studio time awaiting in New Brunswick, the group is eager to test their new material this Friday at the Khyber. Let them take you somewhere.