Nova Scotia’s Safe Body Art Act will finally be enforced next month, seven years after it was first introduced. 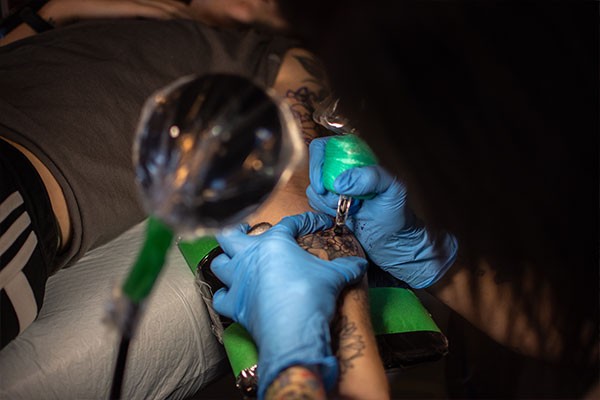 Alexis Clarke has taken to social media to warn others about a local tattoo studio that she says has left her with scar tissue and nerve damage.

Clarke was a former client at the Bedford Tattoo Guest Spot last year. Two days later, she says the sunflower design on her forearm was filled with fluid. After returning to the shop to address the problem, Clarke says the tattoo artist made an attempt to pop the blister with a thumb tac.

“He literally just picked up a tac off his desk and wiped it off with an alcohol wipe and stuck it in,” she says. “I was like, ‘What did you just do?’”

She believes the way the blister was handled and the process of wrapping up the area contributed to further infection of the tattoo, but at the tattoo shop argued with her about the healing process and, she says, dissuaded her from seeking medical treatment.

“I was also told never to see a doctor, no matter what,” she says. “After about a week I gave up and had to see a doctor. I had no movement in my arm or wrist.”

The owners of BTGS did not respond to several requests to be interviewed.

Clarke has since been in discussion with six other people who’ve had similar painful experiences with Bedford Tattoo, including local woman Allison Fudge.

The group is talking about what appropriate action can be taken against the shop, but their options might be limited.

Nova Scotia currently has no enforced regulations for the tattoo industry. But that will finally change next month. Come February, the province will implement regulations around the body art industry, seven years after the Safe Body Art Act was introduced.

It’s meant to give Nova Scotians the confidence that the facilities that have acquired permits are using safe products and are working to stop the spread of diseases.

“Requirements that must be met at a facility have to do with: construction and maintenance, instrument handling and reprocessing, record keeping and developing an infection prevention plan,” says Bruce Nunn, spokesperson for the department of environment, which is responsible for enforcing the act.

A Class One permit will grant permanent and mobile studios permission to tattoo and pierce clients. Those permits will need to be renewed every 10 years at a cost of $195 plus HST. There will also be a Class Two permit available for temporary events, active for 14 days after approval, at $30 plus HST.

Nunn says that many people in the industry want these regulations in place, so the department expects there will be participation from the businesses. If the rules aren’t followed, there will be consequences.

“Our public health officers will have a range of compliance tools that they can use during an inspection such education; inspection orders; warnings; summary offence tickets; long-form charges and revocation of the facility’s permit,” says Nunn via email.

Julie Taylor, owner of the Skin Decision tattoo studios in both Truro and Halifax, welcomes the changes and even had the province come in for mock inspections of her studio last month in preparation of the Act’s enforcement.

Taylor says if she gets calls about potential infections she always educates her clients about the healing process for body art. She recommends her clients see a doctor if the tattoo leads to an infection.

“We’re going to go over what a normal healing piercing or tattoo would look like and then if they think they do have an infection, then I’m going to tell them to go see a doctor,” says Taylor.

None of which is much help right now to Clarke, whose doctor told her she has severe scar tissue and some possible nerve damage from the infection.