The dairy-and-Timberlake-obsessed Winnipeg punk duo is pleased to meet you—and rip your ears off.

From the out-to-please-nobody energy of staying-in anthem "I Need To Go Home" to the brute squall that is "You're Not 23 Anymore", Mobina Galore doesn't give a fuck what you think.

Landing at Gus' Pub tonight (Sunday, Sep 15) hot off the September 6 release of Don't Worry, the duo is ready to melt your face as way of saying hello. And, to help move the introduction along, both Hanson and Priestner have filled out the inaugural edition of this questionnaire.

1. What was the first album you bought with your own money?
Priestner: "I’ve always had this vague memory that it was a Whigfield cassette; I just looked it up and it would have been in 1995. Another similar memory is No Doubt’s Tragic Kingdom, but that may have been a gift."
Hanson: "I honestly can’t remember, but I do remember buying Chantel Kreviazuk’s Under These Rocks and Stones in 1996."

2. If you were to name your influences, which name on the list would be most surprising?
Priestner: "Justin Timberlake."
Hanson: "Cher—which wouldn’t be surprising to anyone that knows me."

3.What’s the best concert or live performance you’ve ever gone to?
Priestner: "It’s a three-way tie between Dixie Chicks (any of the three times I’ve seen them), The Tragically Hip’s final tour or Justin Timberlake’s latest tour. (I almost got to touch his hand!)."
Hanson: "The Tragically Hip’s final tour, tickets were so hard to get but we managed to get four amazing floor seats."

4. What one thing/person outside of music has shaped the way you make music?
Preistman: "My dad, he is so passionate about music and is our biggest fan/critic which both frightens and inspires me."
Hanson: "Cheese, because I wish I could write every song about cheese. I did write a rap about cheese once actually."

5. Share the last GIF you used below:
Priestman: "I’m more of a Bitmoji kind of gal, and this last one is one I sent to Marcia:"

6. Share the last shot on your camera roll below:
Priestman: "The van pack picture!" 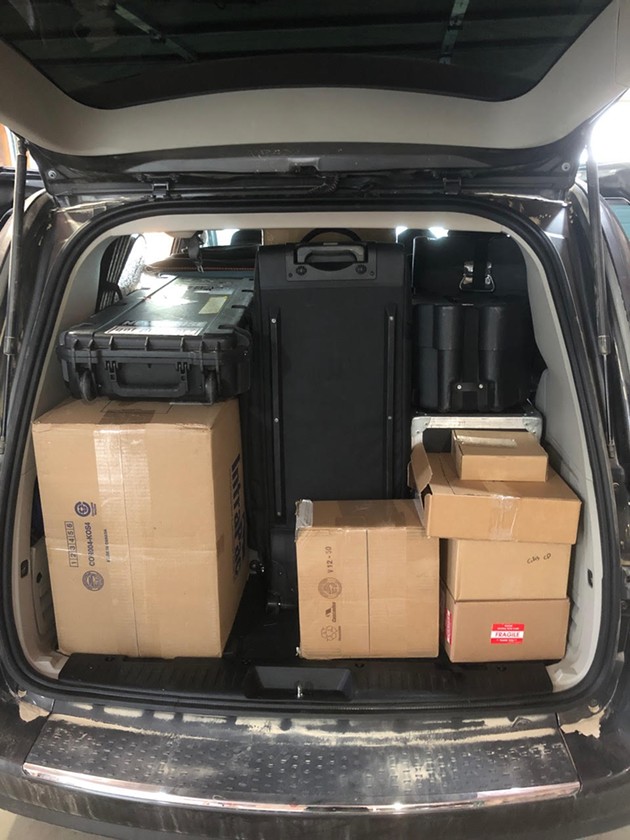 Hanson: "This sweet photo with [famous drummers] Tucker Rule [of Thursday] and Atom Willard [of Against Me!]."

7. When you’re not making music, what are you most likely to be found doing?
Preistman: "Puttering around the house, cleaning and tidying, listening to music."
Hanson: "Cooking or playing with my niece and nephews."

8. What’s your perfect cure for a bad day?
Priestman: "Drinks; if it’s summer being in the sun, or if it’s winter probably snuggling on the couch with said drink."
Hanson: "Homemade macaroni and cheese."

9. What’s the best part about being in a band?
Preistman: "Making 15 year old Jenna’s dreams come true."
Hanson: "Getting to travel and eat foreign cheese snacks."

10. What do you do when you wanna treat yourself?
Preistman: "Spa life. And going to the grocery store and buying groceries like we have money or going for dinner."
Hanson: "Going out for fancy dinner and drinks."