Comedian Paul Warford gives an inside look at the ambiguous future of the Halifax comedy scene. 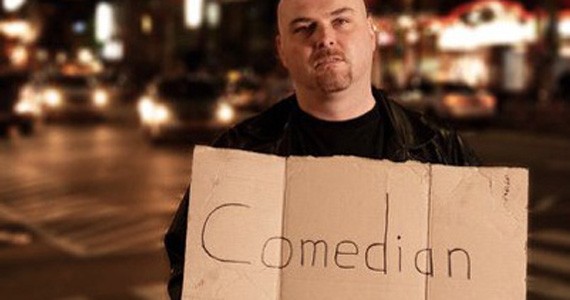 To see a weekend standup show at Yuk Yuk's in the Westin is to watch a manicured performance. But to bear witness to an open mic comedy show in Halifax is to enter a room divided. The front of the house will be occupied by pockets of friends, in herds of small numbers. Meanwhile, the back contains a different group. Generally quiet and seemingly morose, the comedians for that week are poring over their notes, rewriting and tweaking bits before their five minutes of stage time.

In a performance art that relies heavily on exposure, experience and honing, those five minutes are pearls greatly valued and voraciously coveted. To the dismay of local comedians, both budding and seasoned, time is unfortunately not on their side. Finding venues in which to perform is easier said than done, and in a city teeming with artistic variety, comedians have to struggle in order to gain legitimacy, as well as what they love most: attention.

Peter White has served as one of Halifax's most prominent comedians during the seven years of his career. Between touring and writing for This Hour Has 22 Minutes, White has garnered as much from this city as is professionally viable. Consequently, just last month, he relocated to the UK in the hopes of progressing further.

"I left because it's a hard city to have a career in," he says. "I've been able to eke out a living, but it's never secure." White sees the potential in the city creatively, but admits it is restricted in terms of stability, and now even in growth: "It was a good place for beginners. It's getting to be less so. There is a glut of new comics, which eats up stage time."

The solution to more stage time, of course, is more stages. Yuk Yuk's offers an amateur spot to the first 10 to 12 comics in line each Wednesday. The Rodeo Lounge in Dartmouth offers an open mic on Thursdays, under the direction of Marc Sauvé, who has been in the comedy business for over 20 years.

"When I came here in 2006, there was only one monthly room," he says. Sauvé helped to change that when he opened Yuk Yuk's. "It's no coincidence that weekly clubs have contributed to the success of acts like Picnicface and Peter White, as well as other comics who have moved into the city."

Brian Aylward is among those immigrated. Originally from Newfoundland, Aylward dominated the Asian market while living in Korea. He began three comedy rooms while living in Seoul, two of which are still in operation today. Aylward has been attempting to open the doors to a new comedy room in Halifax, which can prove to be a needle-in-a-haystack process: "I try to find an owner who respects and appreciates comedy because that brings an energy to it," Aylward says.

Other locales in the city have already taken a chance on hosting a comedy room, such as Bearly's Wednesday night Laughter Burner, hosted by Mark Sawatzky. Though it floundered initially, the room has been gaining momentum. "Since the new year it's been really good," says Sawatzky. "We have had some killer shows recently, and we're getting a regular audience."

Despite hints of optimism, there remains a certain wariness. "I honestly don't think it's secure," concedes White. Although comics are moving into the city, others are setting their sights on new neighbourhoods. Kyle Hickey, a Halifax comic of three years, intends to head to Toronto this summer. "There's so much more going on there," he says. "It's tough here waiting for weekends and Wednesday amateur nights."