Local embroiderer Amy Chandler works under the pseudonym Friday55 and finds a fan in Gord Downie as well as customers all over the globe. 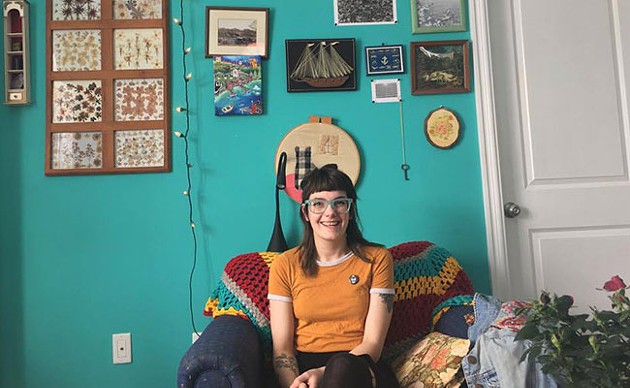 "I work full-time, and I literally come home, try to eat things while embroidering, and embroider from the time I wake up to the time I go to sleep and any time that I'm off," she says. "I love it, I love it a lot."

The 24 year-old NSCAD grad is being recognized for her killer needle skills. Chandler makes hand-embroidered goods under the pseudonym Friday55, ranging from buttons and small hoop pieces to massive fabric patches. Her self described "salty and sweet" designs, flawless stitching and attention to detail is creating a buzz in the Halifax craft scene.

Four stores in the city sell her work, and people from as far as Brazil and Sweden have purchased her crafts.

"Gord Downie has one of my patches. It was a total surprise," Chandler says. Downie's daughter "bought a bunch of patches from me and she gave one to her dad and he really loved it. He wears it on his favourite jacket that he wears to all of his medical appointments."

Chandler says the painstaking process—some pieces can take 60 hours—is calming, if not therapeutic.

"I find it really meditative. I get in these weird states where I find I can really clear my brain out while I'm working," she says. "I do struggle with mental illness, so I've been using [embroidery] almost as a way to treat myself. It makes me feel super productive to finish something."

Though you won't find her at a craft fair just yet, Chandler has been asked to teach an embroidery class later this year, and her clientele is growing. "A lot of people do embroidery but a lot of the pieces take a couple of hours, and I think that's something different about my work is that I put so much time into it," she says. "I think that's really the most impressive part about it."

Halifax vlogger Harper McCormack is kinkier than thou

Nat Chantel’s Silence and Sound After