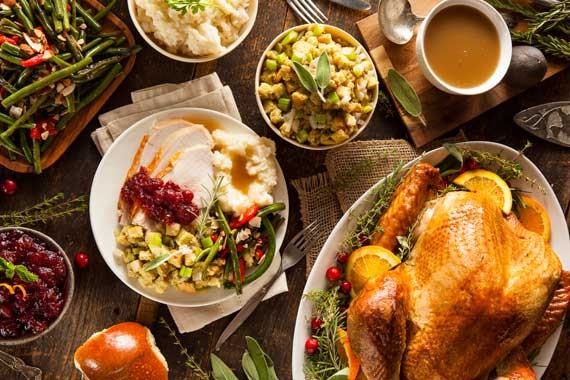 Looking to fill out your Thanksgiving dinner? Engage Nova Scotia is bringing culture to the table with a program for Canadian newbies and Halifax locals.

Share Thanksgiving matches up local hosts with guests—like exchange students and people or families who are new to the country—to share in the Canadian tradition of eating a lot of turkey, among other things.

"Share Thanksgiving is just a really practical way to be more welcoming to newcomers," says Isabel Chender. She and her partner participated in last year's program, welcoming couples from Israel and Australia into their home. Being a couple themselves, they wanted to invite other twosomes over for a dinner party-type Thanksgiving.

Being friendly is kind of Nova Scotia's thing, but according to research, newcomers don't always feel all that welcome to the province, says Engage Nova Scotia's managing director, Nancy Watson.

"I do believe that people have this desire to welcome people into their communities and even their neighborhoods," says Chender. "But don't really know how."

"It's a way an individual or family can take a small, easily accessible step and do something that has a pretty significant impact," says Watson. "On not only the quality of the lives of people who are directly involved but also eventually the future of the province."

It's a great way to have fun and broaden yourself culturally, but it also has larger-scale implications, she says. "We know that we need more people to come to Nova Scotia and stay in order to address our economic issues and to have a more vibrant society."

In its first year, Halifax managed to match up more families, about 130, than any other participant in Canada, with the exception of Toronto.

This year, the registration has already surpassed 180—a sign that Nova Scotians are taking advantage of this accessible way to welcome those from abroad.

"Sometimes people say that we're resistant to change or a little bit less progressive," says Chender. "I actually think we are really progressive."

To make it easier for guests and hosts, there is a fairly simple matching process that uses location, availability and number in your party to decide who you're going to feast with.

"If we can get all of those factors matched up then we can look at other details like whether or not they have kids and the kids are in roughly the same age group, and that kind of thing," says Watson. "We introduce them to each other over phone and email and then they just have a wonderful meal together."

Alice Kuang, who moved to Halifax from Taishan, China in 2011, participated in last year's meal.

"I just felt so thankful for this invitation and experience," she says. So much so that she signed up again this year and urges others to try out the experience.

Right now, Engage Nova Scotia more guests signed up than volunteers to host, so they are in need of some locals to step up to the plate.

"It's pretty simple," says Watson. "But has had tremendous positive feedback and there's been a lot of really great experiences on both sides of the equation."