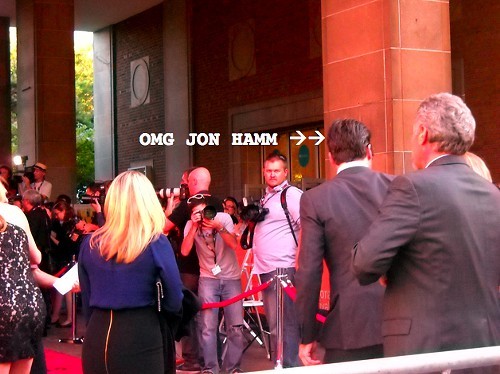 Always nice to start your festival with a clusterfuck—Alexander Payne’s much-anticipated George Clooney-starring Oscar bait The Descendants came at a very early-seeming 9am, until it didn’t start until 10am, meaning over 500 people, many with entitlement issues, were furiously Tweeting their outrage and, in the case of the British man next to me, calling his editor to announce that they must do a story on this. (I was happy to stand next to Stephanie Zacharek from Movieline for awhile and hear people ask her what she saw at Venice. Sigh.)

It is totes #firstworldproblems and all that, but that one hour fucked up the entire theatre for the whole day. (The delay officially was some sort of digital upload problem—the new age’s “projector issues” or, my favourite, “The print didn’t show up”). It also turns logical people against a movie that was minding its own business, but luckily for Mr. Payne The Descendants is fucking terrific. Clooney’s wife has hit her head in a boating accident; he soon finds out in short succession that she is brain dead and was cheating on him: now what? Set in Hawaii, it’s easily the best-looking film Payne’s ever shot, as well as the least confused about its protagonist’s likability (people have been admitting their Sideways hate out of the side of their mouths every time this movie comes up). I’m no Swooney, but he does an amazing job with what he’s been handed as the only star—my favourite Judy Greer and Matthew Lillard are the only recognizable faces otherwise—and he’s got to play a grieving husband, angry lover and struggling Dad in the usual sardonic Payne tone. I cried a lot.

(Sidebar: This festival, more than any of the other six I’ve attended, feels particularly front-loaded just to cause the chaos I witnessed today, and it is making people angry, rightfully in some cases. More on this as the days pile up.)

I missed two different start times and a talk by Ted Hope because of the scheduling issue, which is how I found myself at Pearl Jam Twenty. Cameron Crowe has lost his way since Almost Famous, if you’re asking me, and that would be a fine entry if it were to be the last great thing he ever did, but this documentary on his Seattle friends comes awfully close to his early-90s heyday, especially and obviously Singles. I only know the Pearl Jam hits, but Crowe has gotten his hands on some remarkable footage of Eddie Vedder’s earliest days with the group, including an entire persona-changing moment in Vancouver that gave me chills (seriously). (There is also a thrilling montage of Vedder climbing stage rigging the world over then dropping into the crowd from 50 up.) His relationship with the band calls Crowe’s objectivity into question—he never interviews them as a group, and late-run personal troubles are glossed over—but as an historical document of a time in music and culture, it works extremely well, and the superfans behind me yelped a few times at certain demos and deep cuts. There’s no way it’s not better than the U2 doc, and I will never see that. 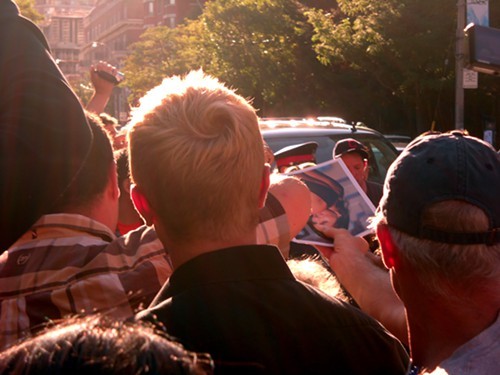 Sue Carter Flinn and I were observing the clusterfuckery of the public kind, and this car pulled up and people started yelling "RYAN! RYAN!" and we nearly passed out, but we couldn't see, and anyway it was "BRIAN! BRIAN!" (Austin Green), husband of Megan Fox, who is under that picture of herself on the right. Blerg, as they say.