Over the holidays Coast film reviewers Matt Semansky and Molly J. Segal caught up on the best of the past 12 months. Here are the instant classics.

by Matt Semansky and Molly Segal 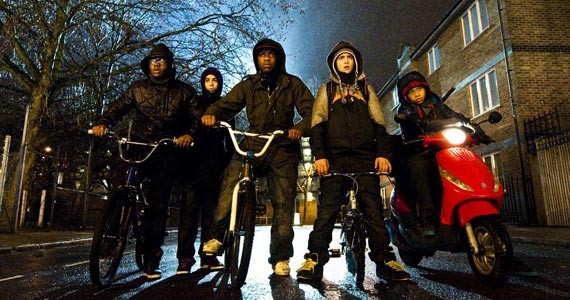 Those are the odds of Adam (Joseph Gordon-Levitt) beating cancer. Good thing writer Will Reiser and director Jonathan Levine crafted a movie that's funny and sad in exactly that ratio. Gordon-Levitt and Seth Rogen (as the best friend) play well off each other. (MJS)

Joe Cornish injects fresh energy into the alien-invasion genre by setting the scene in a tough British housing project and making the heroes a posse of courageous, slang-slinging teenagers. There's some astute social commentary lurking amidst the gory action and distinctive dialect, but the movie also works just fine as a lean, unadulterated 80-minute blast of pure fun. (MS)

Christopher Plummer is a widower who comes out of the closet in his 70s and Ewan McGregor is a stunned son with his own romantic issues in Mike Mills' heart-rending drama. Plummer and McGregor do sensitive work and Mills chooses credible humanity over manipulative cliche, resulting in a movie that earns laughs and tears precisely because it never begs for either. (MS)

Piss-your-pants funny best describes Kristen Wiig's performance in what's been labeled as the Judd Apatow bromance for women (though he produced it, it was written by Wiig and Annie Mumolo). Let's stop billing it as a chick flick and call it what it really is: the funniest movie of the year. (MJS)

Miranda July's shabby-chic aesthetic and sharp sense of humour dominate her second film, in which she also stars. As she and her boyfriend (Hamish Linklater) prepare to adopt a cat (who doubles as part-time narrator), they reprioritize their lives, quitting their jobs to pursue the unknown. July's skill as a multimedia artist and writer are evident in her unconventional storytelling techniques---imagination is reality. (MJS)

Before the summer deluge of sequels, remakes and comic-book adaptations arrived, Joe Wright's movie about a teenaged assassin proved it was still possible to make an original, intelligent action-thriller. Saiorse Ronan is riveting as a feral killer loosed on the world after being raised in Arctic isolation, and Cate Blanchett is cold and conscience-free in a memorably villainous turn. (MS)

Sean Durkin's debut feature is a psychological thriller that's subtle enough to be believable, but will still have your stomach in knots as you watch Martha (Elizabeth Olsen, the younger, talented sister of the Olsen twins) adjust to life after escaping a cult in upstate New York, still traumatized. John Hawkes' performance as the cult leader adds an extra layer of creepiness. (MJS)

The latest of Woody Allen's ventures overseas, this movie has appeal for fans and non-fans alike. When an American couple, Gil and Inez, (Owen Wilson and Rachel McAdams) visit Paris, Gil's nostalgia brings him back to the '20s (literally): a world of Hemingway, Dali and Stein. You don't have to understand all the allusions, though it's extra funny if you do. (MJS)

Here's hoping Quebecois director Philippe Falardeau's festival darling gets released here, because his story about an Algerian immigrant taking over a Montreal classroom after a teacher's suicide is one of the year's most moving dramas. Algerian actor Mohamed Fellag imbues Lazhar---whose obstacles include the Canadian refugee system, personal grief and many layers of culture clash---with uncommon grace. (MS)

The Tree of Life

Terrence Malick continues his career-long conversation with god and nature and comes closer than ever to rendering a unified theory of existence on film. His camera channels his reverent awe of the universe and everything in it, simultaneously revealing the epic beauty and ultimate insignificance of a single human life, while the Brad Pitt-led cast provides a tangible anchor for Malick's ephemeral philosophizing. (MS)