A collection of essays, recipes and family history, Pantry and Palate aims to preserve Acadian foodways past and present. 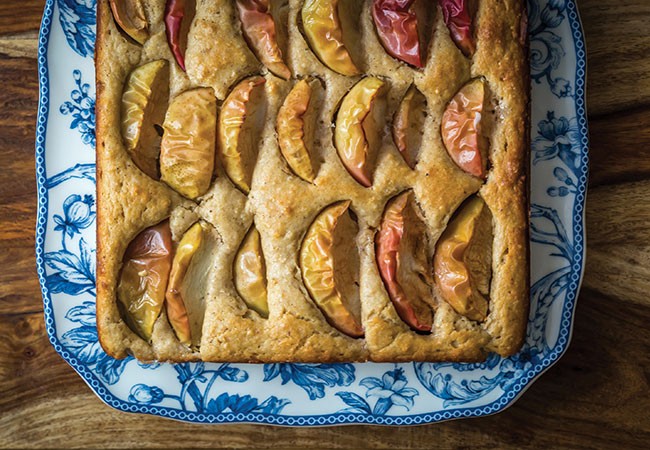 Simon Thibault's new cookbook, crowning bestseller lists on Amazon, is not to be mistaken for a simple assemblage of everyday eats.

No, Pantry and Palate is instead something much more: Equal parts cultural preservation and recipe collection, the work spans Acadian kitchens from southern Nova Scotia (where Thibault, a past Coast contributor, was born and raised) to northern New Brunswick, from the early 20th century to present-day kitchens.

"I really wanted this book to be like the books I like to read," he says. "The kind that really give you a sense of the lives of people making this food on a daily basis."

Photos of Thibault stirring preserves in milk-glass mixing bowls, the same sort that every Maritime grandmother has in her kitchen, bookend essays about Acadian foodways and recipes that the author grew up on.

"It was really important that this book wasn't done in that Atlantic Canadian way where the rest of the country went 'Oh, isn't that cute and quaint and folksy?'" Thibault says via phone from Toronto.

The international promotional tour he's on adds credence to the feeling that the work avoids such a mark. With Acadian staples, like tourtière (that's meat pie) and rappie pie (soft potatoes and salty meat swimming in stock under a crackling crust), broken down step by lard-laced step, this book is for home cooks to re-create and experiment with.

The recipes, from simple breads made in work camps and even tête de cochon are heritage meals, older than the milk-glass bowls Thibault spoons them from.

And that, he adds, is exactly the point.

Thibault will quickly tell you the short list of Acadian cookbooks—at least ones that weren't a handwritten notebook or dusty volume from a ladies' auxiliary—hasn't seen a new edition since a brief, pictorial work from the 1980s.

"There was next to no information about this, so it was like 'Oh shit, this has to be done,'" he says.

Consider it a course outline Thibault created through independent study, a two-year odyssey so thorough it found him before his north end apartment's kitchen sink, water beading off his pork-fat covered palms as he learned to render lard.

He had been sifting through his grandmother's recipe books, trying to decipher the cryptic shorthand and bring the foods of his mother's childhood back to life.

"The notes would say things like 'Prepare white sauce as usual' and I had to figure out what 'usual' meant," Thibault says with a laugh.

Soon, the scope of kitchen projects widened to other recipes typical of Acadian kitchens—including the aforementioned pig's head.

"I don't expect many people to make the pig's head, but it was more a question of getting that information out there and having a record of this sort of culinary heritage," Thibault says.

But if your inner chef is up for the challenge, Thibault's instructions make it a possible process with results he swears by, plus "it's kind of a fun thing to walk around a farmer's market with a pig head under your arm."

By mixing advanced tête de cochon with accessible salted green onions (Thibault's dad's instructions for the popular Acadian topping are to "just keep on adding salt. When you think you have enough salt, add more"), by mixing traditional seaweed pie with a liberally interpreted Acadian panna cotta, by mixing pantry with palate, Thibault creates a crash course in Acadian timelines and taste.

"That's where you learn about foodways and folkways," he says, "and what food can do on a daily level."