Emma, get on the plane 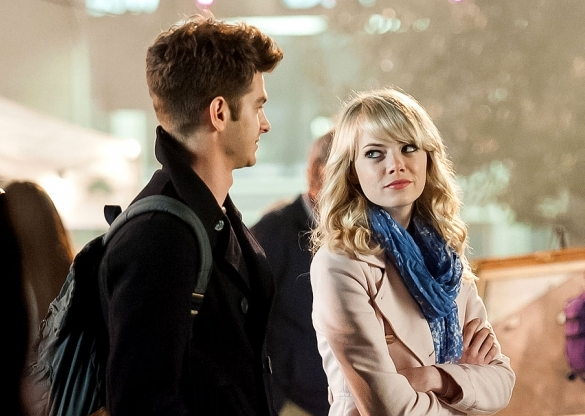 A whip-smart, witty high school grad (Emma Stone), who is mourning the death of her father (Denis Leary) while navigating her fraught relationship with boyfriend Peter (Andrew Garfield), enters the workforce, just another girl trying to make it in New York City. She gets a good job, in her field of scientific research, at a corporation—the benefits are probably great. It's run by a 20-year-old wunderkind (Dane DeHaan), and he knows her name, this lonely boy at the top of the world. Everything at her new job seems to be made of glass, symbolic of her clear-eyed view: She knows what she wants. She makes her own decisions, she tells Peter in plain language, her own choices. Those include applying to, then accepting an invitation to study at, Oxford University, all the way across the Atlantic, away from New York's ghosts and villains. Away from her high school sweetheart, whose artful coif follows her across the tops of buildings, watching her when she isn't looking, like a Dashboard Confessional song come to life, even though he is the one who broke it off. If she could just get away from him she would be safe. She would be free. She wouldn't be falling, falling, falling, needing him to catch her just one last time, and failing.