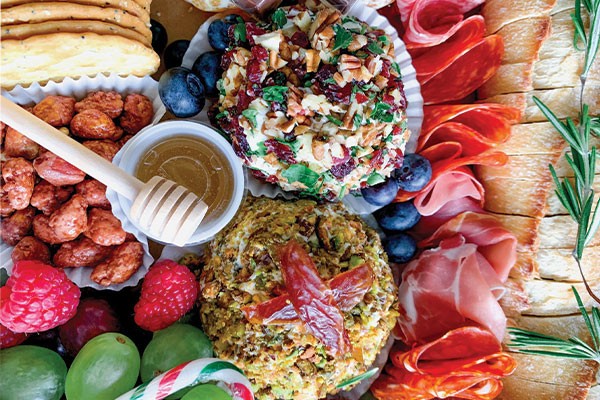 When Andrea Thomson was growing up, way before "charcuterie" became the photo-ready social media phenomenon it is now, Friday night charcuterie was a regular thing in her household. "It wasn't always fancy cheeses and meats, but every Friday we'd always have raw fruits and vegetables and different deli meats and pepperoni," she tells The Coast. "It was just a way that we always got together and had dinner."

A few decades later, Thomson has started her own charcuterie business­—along with her close friend Natalie Leger. "As I matured and got older and found out how much I really love other types of meats and cheeses, it sprung from that," Thomson says.

Leger didn't always have the same love for finger food. "My charcuterie, I always joke it was Boursin cheese with crackers and sliced up cucumber that I would put on my kitchen cutting board," she says.

But her serious FOMO meant Leger couldn't refuse Thomson's offer to get involved with the business idea, and now she's head over heels for the various platters they create. "I just went for it. And it turns out I love folding meat," Leger says, laughing. "And I love making these boards of meats and cheeses, it's all I can think about, I love it so much."

Honey Bliss Box officially launched back in September, selling two options: the four-person Bliss Box and two-person Date Night Box. "We have our set sizes but we're also very into custom work, and we've done toddler boards and themed boards," says Leger. "And we have our first wedding this weekend."

When selecting the ingredients, Thomson says, they try to keep everything "as local as possible," shopping at places like Tomato, the Italian Market and Pete's Frootique. "We have it down to a science now, where we know exactly how much we need for each box," says Thomson.

Honey Bliss takes orders through the week for low-contact pick-up on Saturdays, at either their Lower Sackville or Larry Uteck home locations. For the holidays, Honey Bliss launched a $60 holiday box featuring a cheese ball, dried cranberries and more. They're also selling gift certificates that can be used for boxes in the new year.

"Honestly, the boards themselves and the boxes, they all have the same contents in them basically every week. But getting to really be creative in that aspect and put it all together is an art form and I just really enjoy it," says Thomson.

With such Insta-worthy food, the duo also enjoys seeing people digging into the boxes with their friends and family.

"Our slogan of our business is 'bringing people and food together,'" Thomson says. "And I think in a time where there's a lack of community and a lack of connection, any little bit helps."