The art of fashion 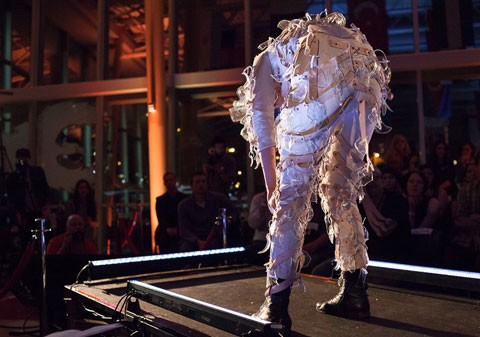 The NSCAD Wearable Art Show and Senior Fashion Show are getting a divorce—and it was a short-lived marriage, since they only merged last year. This year they are happening at different venues on different nights.

The 23rd annual Wearable Art Show, happening this Thursday (April 17, 8pm, $10), is being held at the Marquee Ballroom (2037 Gottingen), with all proceeds going to the AIDS Coalition of Halifax (as they do every year).

“The feedback I’ve been getting about having it at the Marquee is that it’s going back to the beginning of the Wearable Art Show,” says event organizer Justin Lees, “when it was held at bars and was not so much a formal event.”

Lees says this year is especially diverse, with many performative elements. One of the designers even has a piece that requires walking on stilts. “The whole garment covers from the floor to their face,” says Lees. “It extends their arms and their fingers so all of their appendages are touching the floor," Lees says. "It’s a really crazy piece that really distorts what the body looks like.”

The venue, with max capacity of 700, has yet to sell out, but the Senior Fashion Show has been sold out since early this week. This may have something to do with the small venue at the Port Campus (1107 Marginal Road), says event organizer Madeleine Leroux, capping ticket sales at 220.

Usually the show is an opportunity for advanced fashion students to show their stuff, but this year they let other NSCAD students in on the action. With a total of 19 designers and over 100 models, the show is going to have “a whole mess of things.”

One designer, Charlotte Mackie, is taking sketches that her six-year-old sister made and screenprinting them onto transparent fabrics. Leroux says Mackie is one of the more “out-there” designers in the show.

“I think she made one coat where she actually used hundreds of pingpong balls and wrapped them in organza,” says Leroux. “So it’s going to look awesome.”

Although both shows use a runway, the events are far from the same.

“The wearable art tends to distort or change the body,” says Leroux, while the fashion show is more “stuff you would see on the runway.”

Lees says the Wearable Art Show is a great interpretation of “non-fashion.”

“It gives everybody a chance from every study to make something crazy and show it on the runway.”