An exploration into the public art hidden on school campuses. (Huge collection of ceramic mushrooms, you say?) 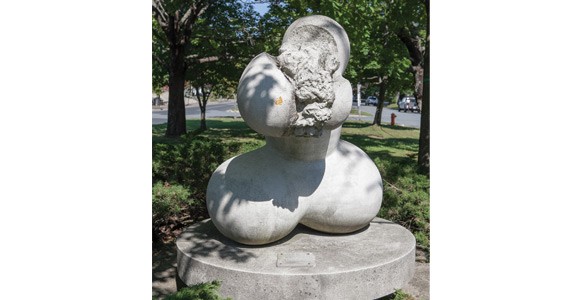 "Is it a giant, exploding dick?" So asked an American classmate of mine back in 2003, drawing my attention to an unusual sculpture on campus at Dalhousie University. Fresh-faced and 18 years old, my teenage brain couldn't associate the sculpture with anything other than the male member either---though certainly not the kind I'd like to encounter in real life. It had grotesque lumps and bumps in weird places and seemed to be splitting open to spew out some strange lumpy foam at us.

My mom thought the same thing, though she didn't use quite the same wording. "It looks like male genitalia," she said, perplexed, looking to me for an explanation as we passed the sculpture outside the Dalhousie Arts Centre (6101 University Avenue).

Though nearly everyone on campus can direct you to the sculpture if you refer to it using one of a few vulgar nicknames, few actually recognize the sculpture by name or have heard of Robert Hedrick, the artist. Hedrick made the work, "Marine Venus," for Montreal's Expo '67. Montreal distillery The House of Seagram presented the nearly human-sized sculpture as a gift to Dal in 1969.

Because of limited budgets, our universities often receive items for display in their permanent collections in just this way: as gifts and donations. Halifax's universities have acquired some unusual collections of artwork and artifacts that are often eyebrow-raising, unexpected and sometimes just flat-out weird.

Trek down into the basement of the University of King's College Library (6350 Coburg Road) and you'll see what I mean. The University's 1807 Statutes, Rules and Ordinances for the library, vaguely states that "There shall be cases with locks...for things of consequence." Today the university library holds everything from a mug William Shakespeare allegedly guzzled beer, and fortified wine from to a 3,500-year-old Egyptian necklace and a Cuneiform tablet.

Inside the brutalist cave-like 1974 structure that is Dalhousie's Life Sciences Centre (1355 Oxford Street), you'll find a hodgepodge of stuff to check out, as well as a strange mix of bright fluorescent colours and undersea murals covering the concrete walls. A Dalhousie Biology graduate, Dr. Constance McFarlane, donated her huge collection of ceramic mushrooms to the University in 1976, which is on view in the Thomas McCulloch Museum. Students either marvel at detail of each ceramic 'shroom or at the prospect that someone would spend such an enormous chunk of their life focusing on fungi---it took artists Ernst and Alma Lorenzen 15 days to make each mushroom, modeled after native Nova Scotian fungi and in hues ranging from blood red to teal.

You'll also get a glimpse of everything ranging from dioramas of taxidermied hawks feeding dead animals to their young to living sea creatures in tanks at the Museum.

But whether torturous our perverse, our universities' bizarre collections of relics of the past inject a bit of needed character into our campuses.