The Atlantic School of Theology: Engaging with the Complexities of Society 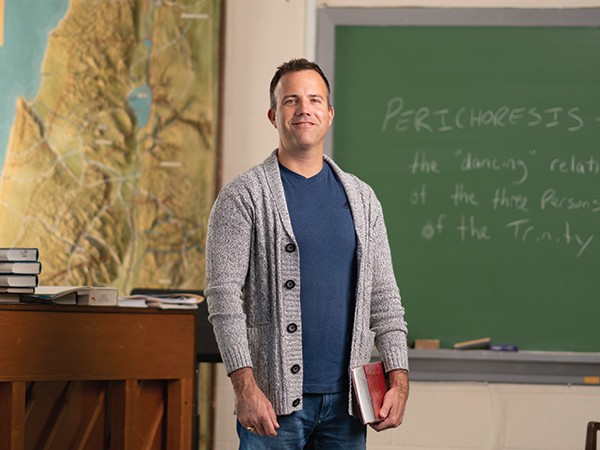 Rick Gunn didn't need the Atlantic School of Theology until he experienced what is known to some Christians as a "call to ministry." He had worked in the church for about 15 years as a youth and music minister and was known as a "Designated Lay Minister" at Bedford United Church. People often told him to get ordained (to get his Master of Divinity and become official clergy), and he would say: "If God wanted me to get ordained, God would tell me."

"In my whole body and spirit, I felt a big 'YES'. Tears came, and I knew it was time to learn and become more in my tradition for my church," he says.

He wanted to continue working at his church during his studies, and with many friends studying at the Atlantic School of Theology, it felt like a good choice.

"Staying rooted in my ministry gave me a place to watch my own growth as my knowledge and training increased," Rick explains. AST's Master of Divinity degree is designed to shape well-rounded church leaders who develop an active curiosity over their time within the program.

As an openly gay church leader, Rick says that AST is unwaveringly and authentically inclusive to that part of his identity.

"Historical Christianity is full of patriarchal, sexist language, but AST is part of the branch of this faith that says we have much to learn about being human in all our divine variances," he says.

AST has a number of programs that suit those from all walks of life, because not everyone who attends wants to be a minister or priest. AST is for those who want to know more about community leadership through a spiritual lens.

The professors at AST are excited about what they teach, and encourage their students to "engage the material", which to Rick meant looking into both the well-founded and the unfounded opinions, looking for prejudice, coherence, creativity and social and cultural placement.

"The flame of my own faith is kept alive with mentors and teachers who can't stop learning and seeking after God. I watch their confidence and maturity in the face of challenge about the place of God and church in society," he says about the professors' openness to all views.

Rick is proud of being a Christian in a society where it feels like an extra- curricular choice. AST's focus on the traditions of the church has helped Rick see even more clearly than before why the world needs Christianity. They don't produce leaders who want to "bring others to Jesus", but rather produce those who want to root themselves in spreading love, seeking justice and engaging with the complexities of society.

When Rick graduates, he hopes to find a long-term position that he feels called to. AST and his prior experiences have prepared him well to serve in many contexts.

"Church life is so intimate, and there's so much responsibility, but I know that I have a strong foundation to see me through and to provide good ministry wherever I go."