Dodgeball isn’t just for the playground anymore. The league is popular and the balls are flying. You could be part of it. 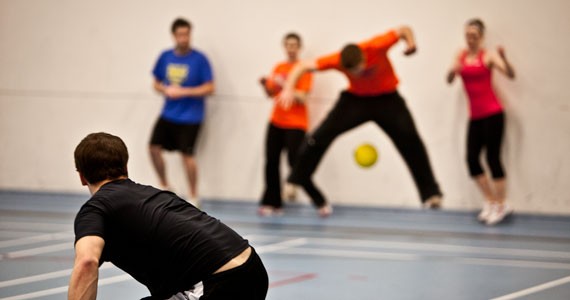 No, you're not in that curtained-off adult section at the video store. This is dodgeball. And while there's never a shortage of clever, witty team names, don't be fooled. The game that had us squealing in terror in gym class, that Ben Stiller mocked on the big screen---it's a serious sport. So serious, in fact, that as of this week Halifax Sport & Social Club, curator of some of the city's best organized sports leagues for adults, has 36 co-ed teams in three skill pools registered for its winter session.

Reigning champ Dodgystyle is one of those teams. They're a force to be reckoned with and have been since 2009, but team captain Angie Miller can't really explain why.

"When we first started out, everyone was on the same level because no one had ever played dodgeball before," says Miller of the team, which has made it to championships every season since. "To look at us, we do not look like the most athletic team at all, but somehow it works."

When she rallied some friends together to throw down three years ago, it was basically out of curiosity, piqued by a friend in Calgary who'd been bragging about a league there. Miller didn't think there was such a thing in Halifax until she found HSSC, an organization that has been encouraging adults to play more since 2008. Though the team's evolved over the seasons, eventually merging with another team of top competitors, Dodgystyle's lineup of nine still has four of its original members.

And that's the beauty of dodgeball---while a little agility always helps, you don't necessarily have to be an athletic all-star to get good at the game. (Though Miller is a little bit modest about her team, as they've got a former football player and some softball players in tow.) "You don't have to be overly skilled," she says. "You don't have to worry about messing up...you can't really make huge mistakes in dodgeball."

That said, this isn't the same game you played in elementary school, barely breaking a sweat in your neon, mesh pinny. The weekly dodgeballing sessions at HSSC cram as many games into their 55-minute time slot as possible. With the house rule that players can't hold the ball for longer than 10 seconds, these six-on-six games are fast- paced. Miller says depending on the night, games can finish in mere minutes.

"It's a good workout. I've never felt as sore as I have after dodgeball," Miller says, adding that it took two full seasons for her to break in her throwing arm. "I've played many sports my whole life and never felt pain like that."

HSCC's motto is "Recess for adults" and it's just as much about playing off-court as it is on. Rivalries are friendly, players come back season after season and post-game beers are common. The Club also awards "spirit points" in all of its leagues, where at the end of each game the captains score the opposing team on a scale of one to five. This way being a good sport accounts for 25 percent of the final tally, the other 75 percent comes from the actual score.

Though educated gamblers would likely put money on Dodgystyle or rivals Ball of Duty taking the season by storm, Miller says the end result of the league is always unpredictable: "Everybody kind of has a chance." It's what she thinks makes the sport so competitive.

Dodgeball might just be the epitome of a team sport. Every person plays a pretty equal role, both all-stars and wallflowers, whether it be in winning or losing, getting knocked out or bailing out your teammates. "Usually you're not out there making big fancy moves on your own, it's everybody," she says, looking forward to the next session of league play. "People just seem comfortable playing it."

The HSSC runs dodgeball all year long in 12-week intervals. Don't worry about having a fully-formed team, individuals can sign up, too. If you're intrigued, but also a commitment-phobe, keep your eyes open for random tournaments too. Miller's tips for newbie dodgeballers? Catching is just as important as throwing---don't be scared of the ball. "If you're playing dodgeball you've got to expect to get hit in the face." Don't worry, says Miller, it'll only hurt for a second.

Dodgeball is more than just an excuse to throw things at people, and more than winning or losing. It's an amazing combination of awakening your inner child, channelling your ruthless competitive side and networking. Plus, it's anybody's game.

Allison Saunders is The Coast's listings editor. And that's ball she wrote.

Hey players---team sports don't end on the dodgeball court. If being the target for flying balls---and pelting them at others---isn't your thing, you've got options.

The Halifax Sport & Social Club is essentially the epicentre of co-ed, adult sports in the HRM. Its lineup changes according to the season (outdoor sports come in the "sprummer" and fall) but includes floor hockey, basketball, court volleyball and indoor soccer. Plus they've got All Sorts of Sports, for the fickle jocks out there. This rotates your team through all of the above activities (plus dodgeball!) to keep you on your athletic toes.

Dalhousie (athletics.dal.ca/intramurals_clubs.html), Mount Saint Vincent (msvu.ca/athleticsrecreation) and Saint Mary's (smuhuskies.ca/wintersports.html) universities have a whole slew of open gym times and intramural sports. They're open to students for the most part, but also faculty and community members with gym memberships at the school depending on the sport. (And some sports are open to the public, with, of course, a drop-in fee or the purchase of a day-pass). Check out the websites for schedules and specifics. —AS