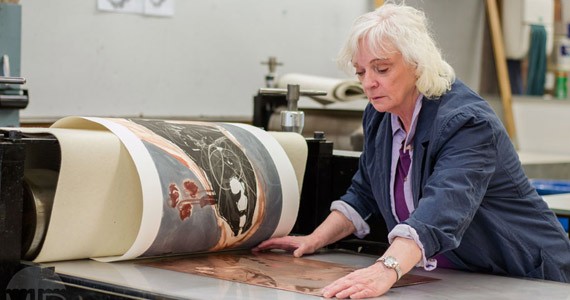 Emily Jewer
Munday plays a bohemian atheist rejected by her son in The Cave Painter.

"How could you not want to understand the world?"

That question, asked by an aging, questing artist named Dianne, is a central one to The Cave Painter, Don Hannah's one-woman show about art, religion, love, loss and growing old.

The atheist, bohemian Dianne (played by Jenny Munday) is facing life alone after her fundamentalist Christian son threatens to reject her. Dianne uses her art, drawn from images in archaeology, as both sustenance against loneliness and a way to make sense of her crumbling world.

The show, running until March 15 at the Neptune Studio, marks the third time Munday has stepped into the role of Dianne. "I'm four years older and quite a few pounds heavier than the first time I played the role," she says with a self-deprecating chuckle. "But each time I revisit it, it's like I have a head start on the process. More familiarity means I can bring something different and deeper."

Munday praises playwright Hannah's ability to skillfully weave humour with dark moments, and says Dianne's quest for truth resonates with her on a personal level. "She is a visual artist and I am a theatre artist, but I think you can say that both practices are about a search for truth.

"This play is one woman's journey to figure out what it means to be human, but I think that that's a journey we're all on."