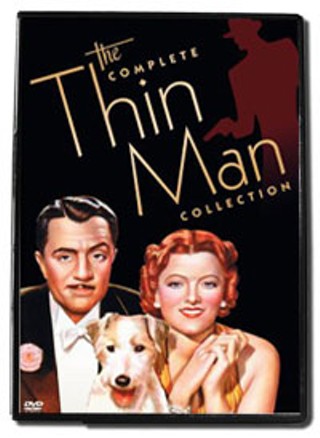 The complete Thin Man Collection
(Warner Home Video)
When critics grouse about how modern movies miss the art of repartee, when they whinge about an absence of chemistry between the leads and bemoan a lack of intelligence in the script, this is the film series they’ll most likely point to as having the best combination of those elements. Only pairing Katherine Hepburn and Spencer Tracy could hold a candle to Myrna Loy and William Powell. Adapted from the Dashiell Hammet crime novel, the original 1934 movie The Thin Man starred the fetching duo as an independently wealthy couple who, along with their loyal terrier Asta, solved mysteries to stave off boredom. The plot is twisty, but neither it nor an occasional hangover would get in the way of Nick and Nora Charles’ midday cocktails. It was their lifestyle that was so much fun, and the witty banter between the leads. Marriage in the movies was never more appealing.
—Carsten Knox