The Crofts/Adams/Pearse Trio channel the unknown 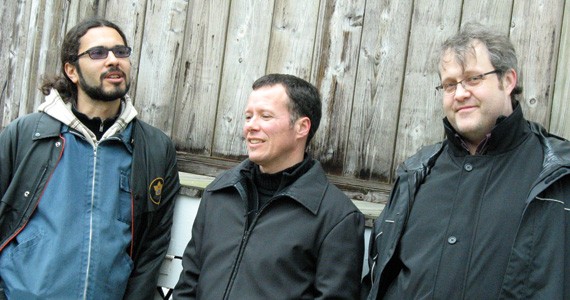 Norman Adams, Tim Crofts and Lukas Pearse are all fixtures of the local jazz and experimental scenes, seen doing everything from concerts to experimental electronic accompaniment to theatre to live film scores. They'd played together before but formed their trio about five years ago with the suddenlyLISTEN new music concert organization (which Adams is director of), playing a couple of shows a year since and putting out Sonomatopia, which is being remixed and re-released in time for the festival. It's often an acoustic trio (bass, piano and cello), sometimes with added electronics---as their festival performance will be.

The space at 1313 Hollis lacks a piano, so "we thought we'd add electronics so Tim didn't feel left out playing electric piano," Adams explains. The trio uses extended techniques---non-traditional ways of playing instruments to create new sounds---in acoustic sets, and the musicians each have their own methods with electronics, including using computer processing through Ableton and Max MSP software, Kaoss Pads, iPhones and "various gizmos."

"The electronics can make sounds instruments can't make," Adams says, "different tone colours not found in nature." They try to set up speakers around a room to "create an environment" when playing electronic shows. The Jazz Festival's bio for the trio describes its sound as "otherworldly." "Anytime you combine sounds, that's otherworldly, it's a blend of familiar and unfamiliar sound," Adams explains. Which other world would they channel? "Probably I would be channelling a better world," Adams says, "one that celebrates the unknown."

Planning Pride during a pandemic