The damage of the Harper years

Canada's dear leader has reduced monitoring, and declared open season on the environment. 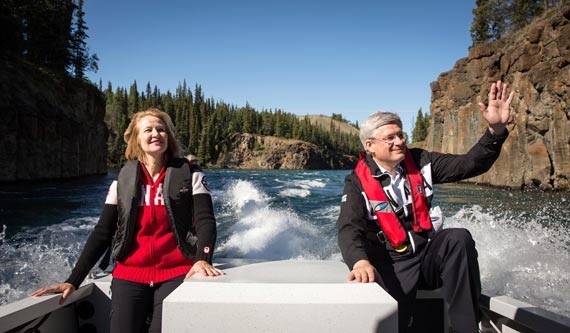 In hushed tones, speaking on conditions of anonymity, one hears a remarkably similar refrain from front-end federal government monitoring staff who were once—and theoretically still are—tasked with environmental regulatory enforcement: There’s no time anymore. So keep your head down and just go through the motions.

The back-end staff, office-bound folks who might, say, prepare the necessary paperwork related to a potential infraction, have been downsized to the point where it simply doesn’t make sense for front-liners to file the paperwork anymore. It’s a time of low morale and routine work; a loss of regulatory capacity that goes part and parcel with gutted protective legislation.

These are the Harper Years.

“Our union has lost one thousand positions in four years,” says Todd Panas, president of the Union of Environment Workers. “We’ve gone from 6,300 members to 5,300 members across Canada. My estimate is that two thirds of those were losses to jobs in science positions, support staff, technicians and some DFO [Department of Fisheries and Oceans] enforcement officers.”

The UEW represents workers in three federal departments—Environment Canada, DFO and the Canadian Forestry Centre—under Natural Resources Canada. It manages technicians, enforcement officers, environmental pollution officers and wildlife officers. These are the folks who enforce the Fisheries Act, until recently enforced the Navigable Waters Protection Act and assist in working through the Canadian Environmental Assessment Act.

In pre-Harper majority days, the Fisheries Act protected against the “alternation, disruption or destruction of fish habitat.” Amended in 2012 under omnibus bill C-38, there are now gaping holes in an act that currently only provides protection to species that are part of a “commercial, recreational or aboriginal fishery.”

Fundamental biological principles, like the understanding that species deemed of “commercial” importance might be part of a larger—now unprotected—food chain, have been cast aside.

Omnibus bill C-38 also radically watered down the Canadian Environment Assessment Act. Pre-Harper, the CEAA was triggered every time a project required a prescribed federal permit, dealt with federal lands or involved the federal government as a proponent. Now, there’s a list of Regulations Designating Physical Activity. If an industrial project is on the list, the project proponent submits a proposal, which may or may not trigger an environmental assessment. It’s a discretionary process.

The scope of an environmental assessment, when triggered, has also been significantly watered down. Before, the actual need for the project was examined, as were potential alternatives. Not so anymore.

In pre-Harper majority days, the Navigable Waters Protection Act, as the title suggests, provided protection against obstructing the navigation of Canadian waters. This protection extended into erecting structures and dumping nasty things into any waters that might “float a canoe”—literally tens of thousands of waterways. Under Bill C-45, this protection was downsized to a list of 62 rivers, three oceans and 97 lakes. In Nova Scotia, only the Bras D’Or Lakes and the LaHave River fall under the new Navigable Protection Act.

“The Fisheries Act was basically gutted,” says Panas. “So was the Environment Assessment Act and the Navigable Waters Act. We’re in a situation that now allows industry to do their own risk management. The reversal of this legislation plays to let industry do as they please and regulate themselves.”

This stance works well for mega-projects, like pipelines, tar sands expansion, mega-dams and large-scale mines, and it fits into the general Harper mantra of being against overly bureaucratic systems of governance.

But has the pendulum swung too far? In an attempt to accommodate industrial whimsy through the deregulation and gouging of what monitoring capacity remains, has the Harper government gone overboard, even for industry’s tastes? Has what’s bad for the environment actually become what’s bad for the economy too?

It is these legislative cuts, after all, that have inspired at least part of a resurgent, if tentative, environmental and First Nations alliance. This alliance, in turn, has sparked and/or assisted in any number of anti-industry tactics and actions; from active blockades, to boycott, divestment and sanctions campaigns against fossil fuels, to benefit concerts, all the way to burning up police cars and sabotage.

Taken in isolation, these events might seem like mosquitos to an elephant. Understood as a multi-faceted reaction to a deregulated climate in which Canadians are now being pitted against the state’s last remaining tool in its box—that of force—and suddenly we have a sociological phenomenon on our hands. And it’s a phenomenon that’s bad for business bottom lines, both in terms of the lack of capacity at the regulatory level, the increasing investment needed for security, as well as the not-to-be underestimated damage to the all-important corporate reputation.

Industry, after all, does not need to be the environment’s mortal enemy.

“In the last week of the 41st session, I got a phone call from one of the industrial groups,” says Halifax incumbent and de facto NDP environment critic Megan Leslie. “They said: ‘We don’t know what the outcome of next election will be. But if you are part of the government, the only thing we are asking is to for you to hire more people, because there’s no capacity left and we can’t get our projects through.’

“I thought it was amazing that industry was actually asking us to hire more bureaucrats. You know you’re at a critical turning point.”

The point, whether it becomes one we turn on or forge the course with, becomes perhaps more critical in light of recent global developments. This week, negotiations concluded on the Trans Pacific Partnership. The massive trade deal, which includes Canada, the US, Mexico and nine other nations, has within it an investor-state dispute settlement provision which allows companies to sue nation states over future lost profits, if they are impacted by legislation and policies. If we are to rehabilitate the “lost acts” to their pre-Harper fortitude, it will most likely be a “now or never” opportunity.

Under another Harper majority, it is estimated the TPP will be ratified in 2016. Once bound into law, the chance of then rehabbing the nation’s environmental legislative and oversight capabilities without facing prohibitive corporate-launched lawsuits against any such attempts gets dimmer. Otherwise, we risk a future of direct resistance, with the state reacting in kind with increased spending on prisons, increasingly prohibitive legislation that further centralizes power and a further muzzling of dissenting, science-based, voices. Oh. No wait. That’s already now.