The dark side of Halifax

Halifax looks great in the tourist brochures, but it has problems that beset many a big town. Here’s a look at our port city’s Slytherin underbelly. 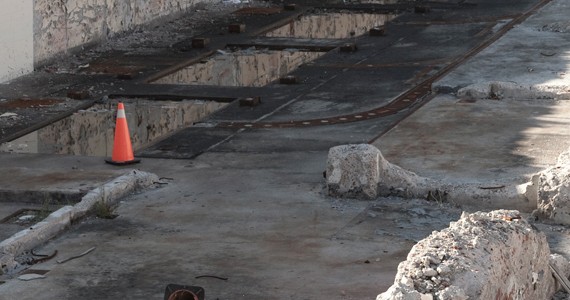 If you're a new student, you've probably been told at every turn about how great this city is---that Halifax is so much more than the quaint hamlet overrun with lobsters that your friends back home warned you about. There's a lot to enjoy here, from pastel north end neighbourhoods, postcard harbour views, a hearty community market, wonderful microbreweries and, yes, quality seafood.

But it's not the glittering castle it's made out to be, either. You've been alerted to Halifax's bright lights---now hop on your dad's hand-me-down Cleansweep Five, soar past the comfort of your castle quad and check out some of its sad blights.

A city's tallest building is generally a point of pride---sleek telecom towers or skyscrapers topped with skating rinks. In Halifax, ours is a squalid former apartment building that looks a mausoleum in palliative care. Fenwick Towers is the figurative rose that grew from the concrete, if that rose was dead and built of concrete. It's also a dead ringer for Azkaban, so don't be shocked if Death Eaters fly out. Its name comes from William Fenwick Williams---a redundantly named British military leader who was held captive by the Russians where he struggled against cold, cholera, famine, and hopelessness. Living in the building captures that sensation quite well.

Now, if you're hungry and have a hankering for pizza or donair, you're in luck, because you have approximately 300 identical options to choose from. This is most visible at Pizza Corner, right next to clubs and Hog's Head-esque pubs, so this is where students come after drowning their sorrows about not getting sorted into Gryffindor by sucking on an intoxicating potion called "tequila." You will be able to identify the area by its belligerent, big-headed oafs, the shrieking girls in shrink-wrap outfits, all looking to blotter bellies of booze. These Crabbe-and-Goyle-types aren't under a Confundus charm---instead, it's straight-up public intoxication and dumb-brained violence, all set to the rhythm of generic club beats coming from the pizzerias themselves.

And speaking of violence, Halifax has more than its fair share. While much of it is relegated to personal beefs between shady characters, no place is totally safe: back in 2008, a guy was shot outside the IWK Children's hospital. And best to walk in groups after dark through the Common or other, less-trafficked areas of the city: when people speak of dangerous swarmings, they're not referring to Cornish Pixies.

And in other areas, Halifax can look like Diagon Alley when the Dark Lord returned. Retail on certain downtown streets continues to suffer, and instead of bold, booming developments, stagnant construction projects define our cultural landscape, like sad bedsores, thanks to the kind of bureaucratic slog that would make even the Ministry of Magic look positively streamlined.

First, check out the gaping pit on Spring Garden Road. Purportedly, that will be the future home of the new Halifax Central Library. But it won't be complete until 2014. Then head over to Argyle Street, where one side has cute shops and picturesque patios, the other side a big carved-out void. Politicians have been angling for years to build a convention centre there---but right now, it's a black hole, smack-dab in the middle of the downtown core.

And there's another hole at the end of Quinpool Road, complete with piles of steel and rubble. That's the last remnants of Queen Elizabeth II High School, a building in a perpetual state of demolition. The plan is to build an urban farm there, a surprisingly and genuinely good idea, but---in the kind of bureaucratic blundering that gives He-Who-Shall-Not-Be-Named his power---the demolition group in charge Cornelius Fudged up the job, had to be replaced by the province, and delayed the farm.

The people making the decisions have been proven to be most untrustworthy. Halifax's mayor, Peter Kelly, our own fuddle-duddle Minister of Magic, has been embroiled in a scandal where public funds were used without council's knowledge to help prop up a concert promotion company's efforts to bring in superstar acts such as Paul McCartney and "superstar acts" like the Black Eyed Peas. Taxpayers were left holding the bill for $359,550---that's bad enough. It's worse that this old-boy network operates as if it has the city under an Imperius curse ---at least, until the next election.

Again, there's a lot to love about this city. You have years to get to know it on your own. But, as Albus Dumbledore once said, "It is my belief that the truth is generally preferable to lies." So when you're done here, just say, "mischief managed," and this will turn back into an article about Halifax's unequivocal greatness.