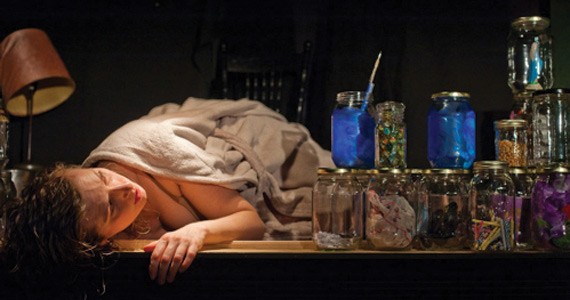 Directed by Ann-Marie Kerr, The Debacle stars Zuppa Theatre co-artistic director Susan Leblanc-Crawford as Margaret, a woman wracked with grief over her dying sister. Of her performance Coast reviewer Kate Watson said "Sue Leblanc-Crawford is a marvelous actress to watch—fear, longing and loneliness pass across her face like clouds across the sun."

Q: You're calling this the "always a bridesmaid" remount, is this really in response to the close calls with the Merritts, Masterworks and Coast survey or is that just timing?
Susan Leblanc-Crawford: We planned to do the show well before we knew about the Masterworks and the Coast nods...so when those happened in combination with our Merritt nominations in March, we thought the "always a bridesmaid" angle was a funny way to celebrate the notice the show is getting.

Q: Has anything changed since the original production that you might draw on for your performance?
A: The original show was "installed" in the Plutonium Playhouse with the action taking place in a crawl space high above the audience's head. Since that production we engaged Andrew Cull to design a "touring" set that is mobile but still allows the height of the playing space. So, we have changed things to suit the new set a little bit. We have also worked on it four times since the original production so we continue to refine the script—adding and subtracting text and moments to clarify and/or enhance. Another big change was Ann-Marie and I switched roles In May when the played at Festival TransAmerique and in Saint John—I was too pregnant to perform, so Ann-Marie starred and I directed her. This change up allowed each of us a new and wonderful perspective into the play and I think it has made the show much stronger.

Q: Can you tell me a bit about the tours and the response that you had in different cities?
A: We have gone to Nightwood Theatre's New Groundswell Festival in Toronto, Festival TransAmerique in Montreal and Saint John Theatre Company—the show has been very well received in all the cities—great reviews by critics and audience.

Q: Has transporting the set been difficult at all?
A: It all packs in a cargo van, but in Saint John we experimented with sourcing the scaffolding and pipe (the structure is made of this) locally. This has it's challenges, but we hope we can continue to do this as it means travel is that much easier.

Q: I wanted to ask about the catharsis of letting things go, and if the process has been more emotionally cathartic or exhausting?
A: Performing the piece is a little bit of both—it is a very emotional ride: at times quite sad and at others very funny. It is always a joy to perform, even if it is exhausting. I always feel very tired after a run through and I think that is the physical engagement as well as the emotional. Initially building the show was a wonderful experience, but at times extremely painful. I remember staying up late into the night trying to write scenes or even single sentences and wanting to throw up the whole time.

Q: How do you get yourself into the proper headspace before a performance?
A: I always do a physical warm-up—usually starting with a short yoga practice. This warms my body and also gets my (much needed for the performance) breath going. I like to sing (even though there's no singing in the show)—that focuses me somehow. I also do my own preset of props so I spend a lot of time in the performance area before the audience comes in.

Q: What is coming up on the horizon for Zuppa?
A: The Attaining Gigantick Dimensions was initially developed in the fall of 2011 and will premiere in April 2013 as part of Neptune’s Open Spaces Initiative. Set in present-day Halifax, the play begins as an army translator returns home from Afghanistan to visit his terminally ill father. The play takes place over a single, ordinary week, in between experiences of war and family death. It is about life’s “little” moments: the things that we so easily and so often forget. It will feature Zuppa’s most complex set to date—layering an evocative live-camera video design within a model village of Halifax. The show is written by Michael Geither, directed by Alex McLean and features Ben Stone, Stewart Legere, Tara-Lee Reddick and me. It's the first show with all of us back together after our sabbaticals. We're really excited to present it!