The Devil Inside: It's hard to believe we need a place called hell 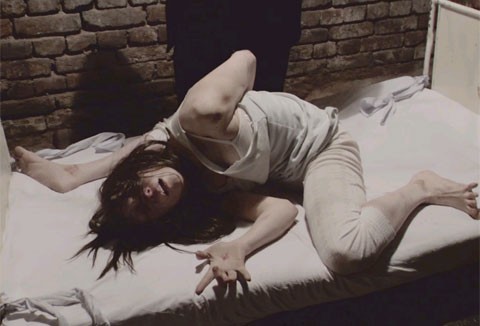 It’s tempting to call this the nadir of both the demonic possession and found-footage horror sub-genres, but one suspects there will always be filmmakers willing to dig deeper craters. For now, director William Brent Bell claims the dubious record for futility with this inept fusion of Exorcist rehash and shaky-cam gimmickry. A “documentary” camera follows a young woman (Fernanda Andrade) to Italy, where she visits her possessed mom (Suzan Crowley) and hooks up with two rogue exorcists (Simon Quarterman and Evan Helmuth). Many contorted limbs and raspy-voiced bursts of profanity ensue, but Bell and his can’t-see-fuck-all shooting style fail to produce any suspense or chilling imagery. It’s all topped off by an ending best described by an audience member I overheard as I left the theatre: “It’s like they just ran out of money.”