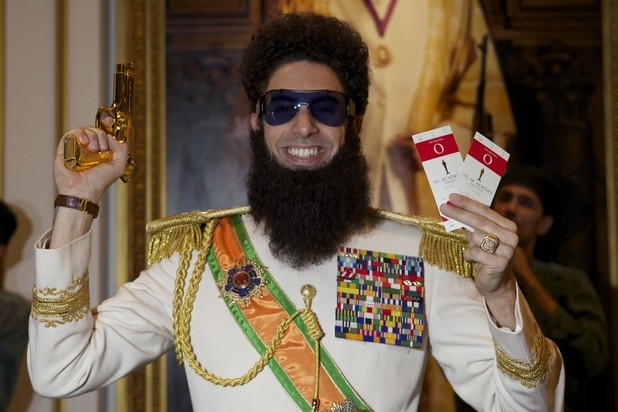 Admiral General Aladeen has previously always had plenty of women, but after being shaved and dumped on the streets of New York he's forced to learn to masturbate. An accompanying visual montage, containing that scene from Forrest Gump where young Forrest runs for the first time, is probably the funniest part of the low-swinging comedy that is The Dictator. Sacha Baron Cohen (Borat) stars as Aladeen, the fictional dictator of the fictional Wadiya. When the unrecognizable tyrant is abandoned, he befriends a hippie grocer (Anna Faris) to reclaim his throne and stop the spread of democracy. A sharper comedy could do a lot with the underdog tale of an oppressive ruler trying to overthrow evil freedom, but The Dictator would rather play around in a sandbox of armpit hair jokes and offensive Middle Eastern stereotypes. Next time, Cohen might be better served spending as much time on story as he does his characters.