Elle’s Bistro gets real with a no-fuss atmosphere and a menu of homey diner classics and epic desserts. 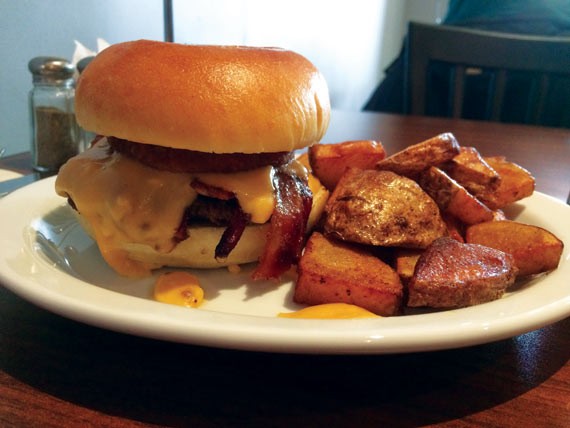 "I'm sorry, I'm scatterbrained today," my server says after I've been seated for almost 10 minutes. I hadn't gotten a menu until just a minute or two before when another server walked by and asked if I was ready to order and the lack of menu was pointed out. She swung back with the menu, and an apology, immediately.

Elle's Bistro is a relaxed space. In some ways—in the above way—maybe too relaxed. The layout, a small scattering of tables at the front of the restaurant and down the sort-of hallway next to the semi-open kitchen and another small dining room in the back, is sort of awkward, almost suited to create easily forgotten tables. But it also feels homey in a hardscrabble sort of way, the same way that you relax when you go to a friend's house and you aren't the sole focus of attention.

One of the first things you might notice is a crib that sits next to the tables in the window. The owner, Mary Elle Planetta, recently had a baby. I often see her in the window holding her baby—nursing, rocking, cradling, cooing—when I walk down Barrington Street. She is clearly making the business and her life work however she needs to. There's something not only admirable, but thrilling, about seeing someone pull the threads together into a getup that works, a semblance of 'doing it all.'

Planetta was my server plenty of times at Cousin's. A friendly, hard worker, she was notable; she was good at her job. So it was a delight to see her branch out on her own. Still, there is a slight echo of Cousin's at the Bistro with a menu that focuses on burgers, sandwiches and home-spun mains, like lasagna and roast turkey.

When my original server finally takes my order, he's just as friendly and welcoming. He gives me an eager recommendation for the jalapeño beer cheeseburger ($6.95). After my order is in, between the sears and sizzles that rise from the nearby grill, I hear another person a few tables away rave about the burger.

Fried on a flat-top, it's a classic diner patty, well-done, but still juicy with that nice ridge of crispness on the outer edges. The cheese sauce is very mild, but makes for a good foil to the lick of heat of the raw, unseeded jalapeno peppers tucked underneath the patty. Candied bacon adds a sweet crispness that gives a satisfying roundness to the simple combination of toppings. The home fries ($2.50) on the side are also fantastic: crisp golden chunks with pillowy insides. They immediately make me crave a breakfast platter.

I go back a second time for a very early dinner. This time the restaurant is empty, except for Planetta. I get the jalapeño bacon cheddar grilled cheese sandwich, described as served on waffles of shredded potato. This time it's not so great: the potatoes are small pancakes, flattened mashed potatoes with no crispness to the edges. The bacon and jalapeño can't stand up to the potato, so it's a bit of a bore.

I correct course with the deep-fried banana split, which Planetta describes as "epic" in what turns out to be an hilarious understatement. Dipped in a light, fluffy pancake batter, the banana almost melts into a pile of ice cream that looks like a February snowbank. I give up, feeling like I'd hardly begun.

Elle's Bistro isn't perfect, but what is? There's a charm in the lack of fuss, and appeal in the almost autobiographical ambiance—and there's enough good stuff happening there, grounded in a sense of real life, that I am excited to see where it goes, to see the rest of Planetta's story unfold.