After months of being sworn to secrecy, today the crew at Pro Skateboards got to reveal the limited-edition line of Star Wars-themed decks by legendary skateboard maker Santa Cruz. This made for a bit of an unwrap party at the Quinpool Street store, as stock that's been sequestered in the back room until the official release date was finally allowed onto the shelves.

Loads of characters from the Star Wars universe are featured—there are storm trooper longboards, Boba Fett and Yoda set-ups complete with matching wheels, Han Solo and Princess Leia decks—with no sign of Bizarro universe denizens like Jar Jar Binks and General Grievous. In other words, they are awesome. 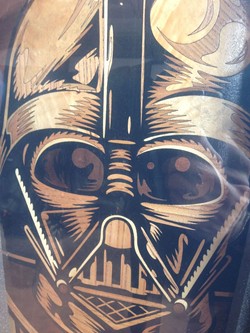 The jewel of the collection is the all-wood Darth Vader inlay deck, where Vader's face is made completely out of maple, elm and walnut burl veneers, rather than being painted on the finished deck.

In other words, Darth Skater isn't going to actually ride one of these around. But for the serious fan of both Star Wars and skateboarding, definitely an object of desire. Pro Skates' one inlay deck is priced at $536, with lower price tags on the rest of the line.

The Santa Cruz promo video, complete with trip to Lucasfilm and cameo from the man in black.