The end of the Microgallery

NSCAD’s smallest artist-run centre was wiped out with a single brick, will a window open where that door closed? 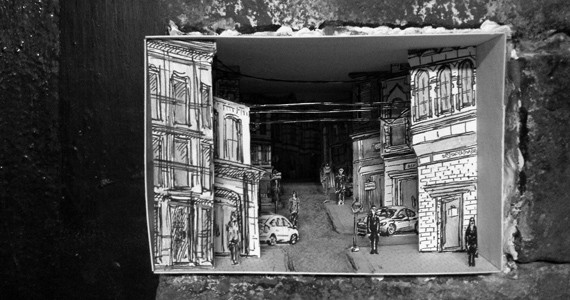 A small but seismic change has rocked NSCAD, a tiny difference that had enormous reverberations and elicited emotional responses from students—in short, never underestimate the power of a brick.

NSCAD's Microgallery was a mini gallery in a hollowed-out brick in the stairwell of the 5163 Duke Street. A few months ago, it was ticking along with its five-year run. First opened by Ben Stephenson as a class project with guidance from Michael Fernandes, the gallery has been run by various students throughout the years, who would take submissions and plan openings complete with refreshments. Housing sound installations, dioramas, drawings, sculpture and more—the gallery contained fleeting flashes of creativity where students needed to see it the most, in the hall of the university meant to kick off their new careers and practices. Then, a student, Jack Wong, put a brick in the space, prompting general outcries of "what the fuck?"

After it was temporarily left vacant, a group of students, including de facto director Laura Baker-Roberts, decided to reopen the gallery in fall 2013, dubbing it the world's smallest artist-run centre. Instead of doing monthly openings, they went even bigger, hosting weekly exhibitions. The turnouts were great, the ideas were flowing, but not everyone was pleased with the reopened space.

"I was unimpressed, it was becoming an institution," says Wong. "They became gatekeepers, proudly adopting the structure of an artist-run centre—as children putting on adults' clothing." Wong clarifies he's not against artist-run centres, he volunteers with and is on the board of one. But the limitations of a historicized and established space was where the issues began. "There was a window of opportunity to imagine something beyond that spot," says Wong. Reopening the space "worked against radical imagination—students venerated the gallery, but in the process they forgot that nothing is stopping them from putting a hole in the wall.

"What I did wasn't publicized, one day there was a hole and the next there wasn't. I wanted to see what would happen—it's a bit of test."

Wong discusses how the double meaning of the space—the fact it was both a gallery and a hole in the wall—had gone missing, and he found Baker-Roberts had been granted an authoritative role by other students. "She started becoming figurehead in the NSCAD community as an organizer," says Wong. "There were quite a few other ideas for mini-galleries floated by other students—one in a cabinet in a washroom, a window display in the lounge. Everyone felt the need to go through Laura and ask if that was alright, to get her opinion and her help, to get it sanctioned by the body that seems to be empowered to sanction it."

Wong knows his decision wasn't a popular one. "I've not heard positive responses, I've overheard conversations like "Why did they shut it down? It was such a cool thing.' It's just a brick and a bit of mortar. Anyone with a hammer and chisel can chip it back out and make their own statement."

Baker-Roberts hopes that will happen, citing the Microgallery as a special part of student life at NSCAD. "When I first found out about it I was so excited, it was magical and added to whimsy that NSCAD has," she says. "A lot of people are very angry. This beautiful community space is gone."

Baker-Roberts explained Wong contacted her after hearing about the intended reopening, sending her a critique of the idea. He later sent a proposal to brick it up. "It was such a strange reaction," she says. "I wasn't going to make that decision and I let him know that put me in a weird position. Jack bricked it up without telling me."

Baker-Roberts used her experience with the gallery as a stepping stone, becoming involved with the Eyelevel Gallery, Anchor Archive Zine Library, and most recently, curating the BSide Gallery space in Plan B. She's also on NSCAD's student union. "I'm on student council because I want to make life better," Baker- Roberts says. "We're trying to infuse every part of student life with change."

With the Microgallery, everyone contributed to student life, Baker-Roberts notes Kelly Zwicker's audio piece don't need no, the piece that reopened the gallery, ran every day for eight hours: "You'd walk into space, and hear this ominous slowed down 'Another Brick in the Wall' playing. She covered it up with a fake brick and it looked perfect."

Manet Dykes—also responsible for the gallery's posters—created something as fun as it was messy. "Manet cut a perfectly fit brick of strawberry ice cream in the space and let it melt," says Baker-Roberts. Dykes served strawberry milk and cookies at the opening to round out the experience. Pieces also commented on changes at NSCAD—for one exhibit, a student printed up a letter saying the gallery was being repurposed as retail space.

Despite the apparent finality of Wong's move, Baker-Roberts remains positive. "It's exciting to have a dialogue about what that space means," she says. "People at NSCAD can and should be making art all the time."

"So much of my practice has to do with community, so this was very hard for me. I hope someone moves forward and does something else. It's important for students to resist that apathy," Baker-Roberts says. "I hope someone chisels it out and makes something new."