The form and fun of Snotty Nose Rez Kids

The Vancouver duo combines hip hop with their Indigineous culture: “It goes hand in hand, really.” 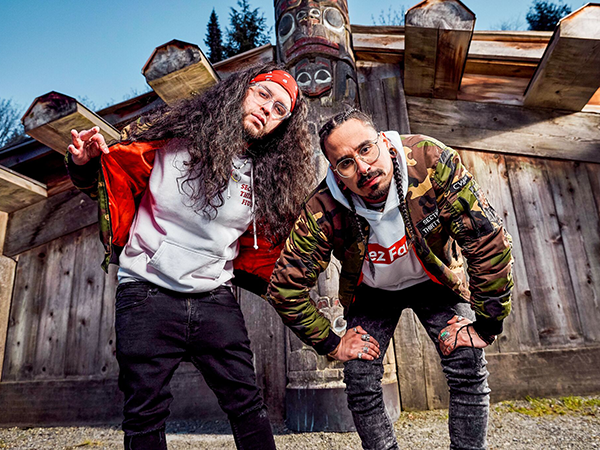 F rom the jump, Snotty Nose Rez Kids grab your ears and attention. Even the name of the British Columbia-based hip hop duo acts like a sharp finger-snap, making the listener confront their internalized racism the way its founding influence NWA did—exposed teeth fluctuating between a smile and a snarl.

"We wanted to pick a name that really represented us and where we came from and that had some humour in it, to show that we know exactly who we are," Darren Metz (AKA Young D) says with a laugh as the duo speaks by phone.

Metz and bandmate Quinton Nyce (AKA Young Trybez) are just back in Vancouver from Kitamaat Village, the small reservation where they grew up listening to some of hip hop's biggest records—which explains the ever-so-slight Tupac affectation that's punctuated every bar since the duo's 2017 self-titled debut.

The pair's origin story is one that, by now, you probably already know—they were, after all, nominated for a Juno for 2018's The Average Savage, and when Jeremy Dutcher's act of cultural preservation Wolastoqiyik Lintuwakonawa nabbed the trophy instead, he made sure all of Canada heard they were part of the same wave of "Indigenous renaissance" washing ashore on our playlists. You probably already know that Metz's and Nyce's childhood friendship naturally progressed into the duo rapping together. Then, when Metz moved to Vancouver to study audio engineering, an album quickly followed suit.

They haven't stopped obsessing over the genre—or chiselling out their own space within it—since. SNRK's newest album, Trapline, dropped earlier this month, and showcased in its beats and wink-nodding lyrics that both rappers never stopped studying hip hop's greats, turning their ears and attention to the Atlanta scene.

While The Average Savage saw the duo's trademark tight rhymes augmented by Late Registration-style skits about Indigenous portrayals in the media of their childhood, Trapline presents an alternate view, suggesting who the stereotyped actually are: "To us, the skits really tie an album together. We're not just writing a chapter, we're writing a whole novel, a whole book," Nyce explains. "With the last album, the skits really tell the listener where we come from, and who raised us to be the people we are today. All the skits are done by women in our lives and women that are really important to us."

Amongst Lil Wayne and Jay-Z, many Indigenous activists stand as tall personal influences. "The Idle No More movement really paved the way for us, that's what really opened up the lane for artists to speak politically," Metz says. "Kanahus Manuel"—of the Tiny House Warriors, water protectors working against the Kinder Morgan pipeline—"her energy, her message, her knowledge, her wisdom is just top-notch and really inspired us from 2018 onward. She makes me wanna do better."

It seems doing better, for Metz and Nyce, will always be doing something over the thud of an 808. Hip hop "originated from people that were oppressed, so it kinda fit us like a glove," Metz says. "When you think of hip hop and Indigenous culture, it goes hand in hand, really. Take all the elements of hip hop: You have the MC, in our culture we have storytellers. In hip hop you have the graffiti artists, in our culture we have the carvers, we have our beaders, our painters. You have the b-boy dancers in hip hop. Us? We got our pow wow dancers. You got the DJ in hip hop and obviously, we have our drummers. It almost became second nature to us."