The future of weather

Meteorological prognosticating is for the birds. 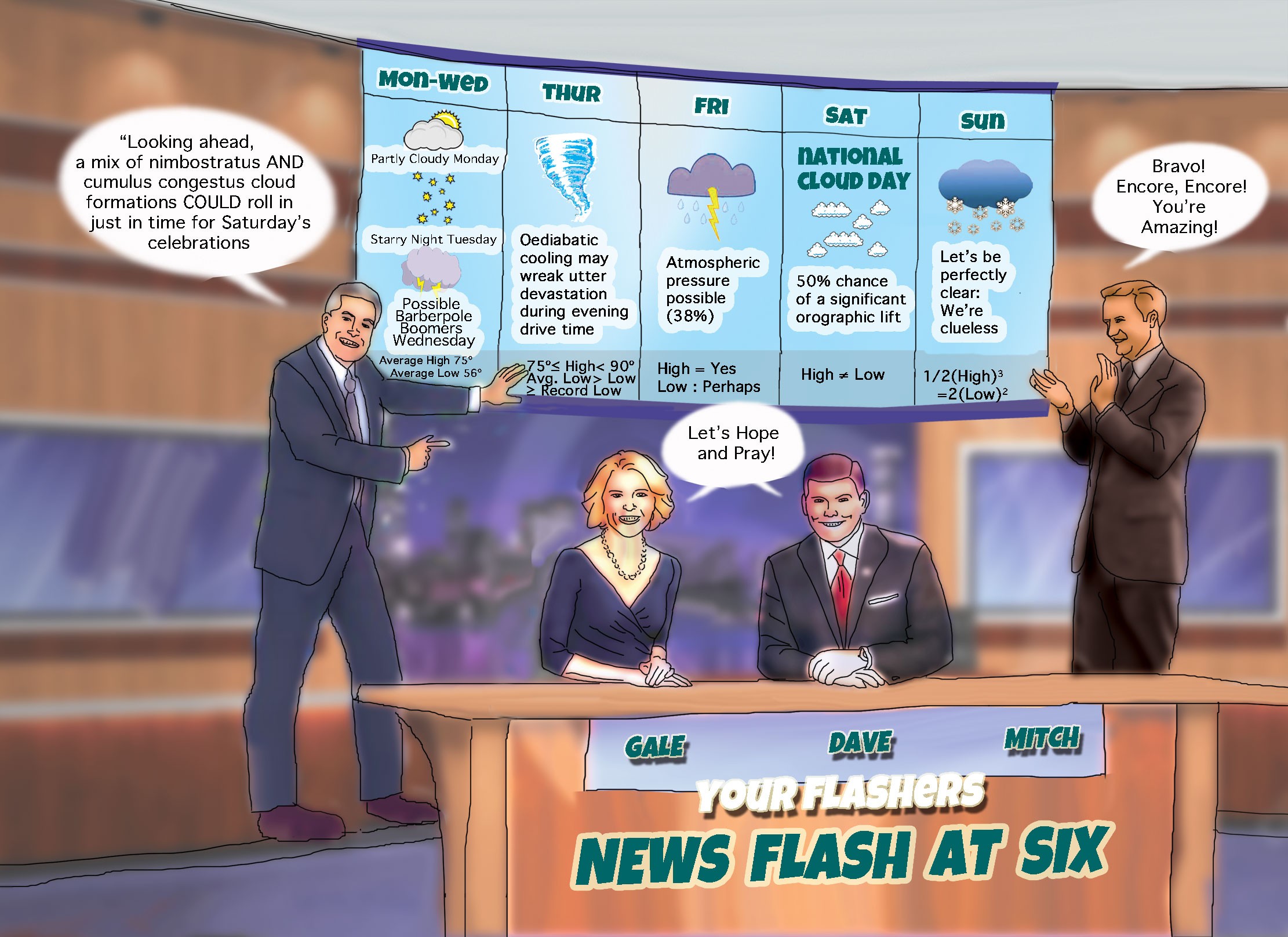 Folks, a “cold front” isn’t just a between-the-sheets phenomenon, and thermocline isn’t just another fun word to spell with Alphagetti. And even the TV Jeopardy geniuses would be wise to steer well clear of the Adiabatic Process category. But overly academic as they may seem, these brain teasers actually do serve a purpose. Pig-Latin as it is for the majority, for meteorologists, mastering this jargon is par for the course. And just as many of those in the medical profession are prone to weaving seven-syllable words into conversation, so too are forecasters likely to do the same with their unworldly lingo. To them, a “hook echo” isn’t the name of an obscure board game. It’s…what else?…a radar reflectivity pattern observed in a thunder clapper. Duh!

And that, in a nutshell, is a large part why professional weather forecasters hang in such rarefied air, revered and idolized by the masses. They actually know what this stuff means. This is their calculus. These prognostications are waited on with bated breath, their slick wizardry becomes unquestioned. Our leisure lives are crammed around their fancy maps and sophisticated computerized Doppler weather radar models. Umbrellas are lugged around on clear days on orders from these luminaries that leaking clouds were spotted some fifty miles northeast ten minutes earlier. And we believe them—wholeheartedly. Why shouldn’t we? They’re well-respected weather peeps.

There’s just one thing, though, that doesn’t sit well with this environmental science. And you have to look real close to notice. But it’s there. In front of our noses but behind our backs, it’s there. The soothing voices of these sharply-attired, quick-witted, hand-a-waving prophets aside, there is something fundamentally flawed about this hypnotic profession.

Funny thing is, we—the ever-gullible junkies we are—actually demand to keep the drip flowing on this insidious meteorological racket. Our picnics hinge in the balance, as do landscaping chores and a veritable host of other alfresco dalliances. Information, please. Give us our meds!

It’s a subtle taunt, dangling just so at the windup of every carefully choreographed segment. The next five days or so will bring showers and lower temps, but the weekend looks beautiful. I repeat: Beaut-i-ful!

Maybe…maybe not. It’s a well-known secret that these extended outlooks are laden with variables. Sure, computer models do provide the oomph for future predictions. But is this conjectural evidence, significant in its power to make or break backyard barbecue plans before they even get off the ground, compelling enough to make public?

Granted, fire whirls are serious business for anyone who studies them for a living, but for everyone else, just a plain old accurate short-term forecast usually suffices. Tonight, tomorrow. The next day. Three days max. Anything beyond that is a calculated guess. Not quite a par-five from the truth, but still, murky enough to omit from the equation.

The problem is, people have short memories. Four days from now, the two- to three-day forecast would be more or less accurate. But, add in those four days, and the extended forecast would be, for the sixth and seventh days, a virtual Etch-a-Sketch. Winds may shift direction, or wither out entirely. But we wouldn’t notice. Instead, we’d notice that the short-term outlook would be accurate. And why wouldn’t it? It usually is. It’s less variable. Weather forecasters, those who had raised their hands in science class, come to realize this fault and learn to exploit it through the camouflage of “50 percent chance of showers late Tuesday afternoon,” or “a groundhog somewhere saw his shadow today, so I see a 58 percent probability for a blizzard late next week.” Well, of course.

If news reporters were allowed the same professional latitude, many would be cited for contempt. Imagine a six o’clock news anchor working herself into a lather; “Well, Charles, the suspect sure as heck looks guilty. Look at him, I mean, look at that smirk. Betcha didn’t know, my ex-husband wore that same look of indignation that night he staggered home late reeking of (explicit) Sophia Loren. Yeah, Chucky, the guy’s guilty, all right. Guilty as sin.”

———
Voice of the City is a platform for any and all Halifax individuals to share their diverse opinions and writings. The Coast does not endorse the views of those published. Our editors reserve the right to alter submissions for clarity, length and style. Want to appear in this section? Submissions can be sent to voice@thecoast.ca.