Governments are choosing the path of stark resistance in curbing COVID-19 spread.

For the most part, Nova Scotians have embraced the provincial orders that shut down parks and trails in an effort to limit the spread of COVID-19 via public interaction. “Stay the blazes home,” we scream with delight into the ether.


But HRM and the province's implementation of the new policy has created confusion over whether paths and trails through the downtown’s greenspaces can—or should—still be used, leaving Halifax walking a thin line between effective public safety measures and byzantine over-enforcement of the outdoors that may prove misguided in the long run.


Until a few days ago, all of the Halifax Common was off-limits, including the paved walkways for pedestrian use. Those hoping to cut through the Common had to either travel the long way around using public sidewalks—which are only 1.5-metres wide and thus too narrow for proper social distancing—or risk a $700 fine.


“That is part of our transportation network, and blocking it does absolutely nothing to fight COVID-19,” tweets urban policy writer Tristan Cleveland, whose brother was ticketed for using the Common’s pathway on his way to work. “This policy is broken and unjust.”


The city quickly responded by putting up some little flags. 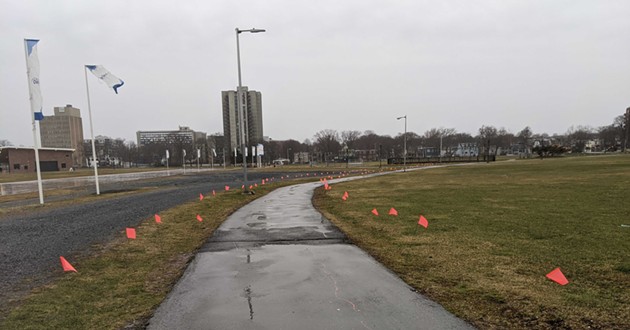 HRM spokesperson Brynn Budden told The Coast: "The paths that are flagged are open as pedestrian sidewalks and are meant to be used as a thoroughfare. People are not permitted to gather on the paths or travel on any of the surrounding green space."


It appears the path was always able to be used, and the overzealous officers who ticketed Cleveland’s brother erred in their enforcement of the sudden and confusing policies that have had to be enacted to limit public gatherings and keep Nova Scotians alive.


It’s hard not to think back to the Before Times and Halifax’s smoking ban. There we had another suddenly-enacted policy to police behaviour. Assigning random zones for the use of cannabis and tobacco products created a quagmire of legal and administrative red tape that, ultimately, only used up time and resources. 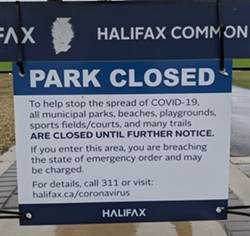 But that was before the world went away. City officials, like all of us, are scrambling to figure out the best information and actions to flatten the curve. Across the globe, governments are closing down outdoor spaces to avoid coronavirus spread, with many authorities displaying the same technocratic anger our unexpectedly now-beloved meme-ier barked at the public.


Zeynep Tufekci, over at The Atlantic, says this is a misuse of resources and could make things worse over the long haul. Exercise and the outdoors will be important for our immune systems and our mental health as society’s shutdown continues for months, if not years.


“This doesn’t mean we shouldn’t limit park attendance at all, but there are better answers than poorly planned full closures,” writes Tufekci. ”We could, for instance, reduce congestion by regulating inflows of people over time. In large cities with limited park space, households could be assigned days for visiting, with even and odd house numbers going on different days. This has to be mostly voluntary, of course, but this is a pandemic: Most everything has to be voluntary because there is no way to get through the next 12 months by arresting everyone who wishes to get some fresh air.”


Like the smoking ban of yore, other jurisdictions in Canada have taken a different approach to the use of neighbourhood parks that may be worth imitating. Erica Butler, over at the Halifax Examiner, notes that Ottawa has closed parks except for walking through, provided those inside are maintaining social distance. Vancouver has parks staff patrol areas to remind people to maintain a two-metre distance.


“Vancouverites were flouting distancing as badly as Haligonians in recent weeks. But that city’s approach was not to bring the hammer down and close all parks,” tweets Matthew Halliday. “And yes, going to a park may seem like a trivial thing right now, and jurisdictions are making the best choices they can on the fly. But with weeks and months to go, the physical and mental-health issues associated with sheltering in place will rapidly mount.”


For now, the little flags will have to be enough. HRM says anyone with trail or path specific questions can call 311 and staff will triage your question.

Though it may “feel like a trap,” it’s perhaps a small sign our governments will be willing to listen and adapt their isolation measures to keep keeping us safe, while still allowing us to live.


Until then, remember, the grass is lava.