The Halifax student behind @Trump_Regrets

“I heartily recommend taking a look at @Trump_Regrets,” writes billionaire tech investor Chris Sacca to his 1.7 million followers on Twitter. “It's cheaper than therapy.”

Countless hot takes have been ignited since November trying to understand how the hell Donald Trump became president of the United States of America. Halifax student Erica Baguma was curious about something else: How would Trump’s supporters feel after he became president and actually got to work? 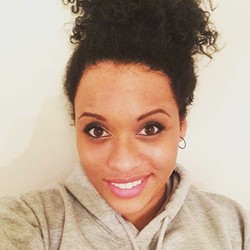 That’s why the social anthropology major at the University of King’s College started her @Trump_Regrets account—personally searching the depths of Twitter and manually retweeting any remorseful voters who have changed their minds post-election.

“I was just curious to see how his supporters felt like he was doing,” says Baguma. “I found there was so many people that were already feeling totally disillusioned and betrayed by him. I just thought it was interesting to keep track of it.”

Here's a sample of that disillusionment: “@realDonaldTrump Everytime [sic] u speak I realize I made the BIGGEST mistake of my life voting for you! Get a brain! And a Thesaurus!!”

With only 1,100 tweets, the account has amassed over 72,000 followers. That’s double the amount it had two days ago, largely thanks to celebrity fans like Sacca and Community creator Dan Harmon, along with some media coverage down south.

The most common reason for former supporters feeling contrite? Baguma says up until about a month ago it was Hillary Clinton not being indicted. More recently it’s Trump's tweeting.

@realDonaldTrump Why are you obsessed with ratings & crowd size? It is time to govern. This is not TV. I supported you & expect much better.

Instead, the 70-year-old president has spent his first week in office battling with the media and spitting out tirades against protestors, celebrities, immigrants and foreign governments.

Which is why Baguma is really impressed by the people she sees who can admit their mistake—those who aren’t blindly loyal to one side and able to change their minds. It’s comforting, she says, especially given how easy it is to write off any Trump supporters as hate-filled dogmatists.

“A lot of people are just single-issue voters, didn't look at anything else, and then a lot of people really didn't trust the mainstream media,” she says. “I've learned that Trump voters, it's a more nuanced population and they're really diverse. It's not all bigots.”

That's one truth in a sea of alternative facts: It isn't all bigots.

“A lot of people were saying ‘It's just so depressing. I don't want to look.’” says Baguma. So I was surprised that there were a lot of people [changing their minds.] This kind of gives me hope for the first time since the election.”