The Importance of Being hilarious

Neptune Theatre's production of The Importance of Being Earnest hits all the right laughs. 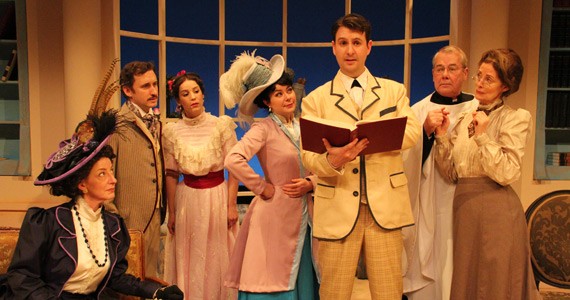 Neptune Theatre's production of The Importance of Being Earnest

Oscar Wilde is the king of intelligent comedy and The Importance of Being Earnest is his crowning achievement. The Neptune Theatre production gives this gem all its due with a sumptuous set, opulent costumes and first-rate performances. Michael Therriault is a suitably impish Algernon and his puppyish manner is balanced nicely by David Leyshon as the more grounded Jack. Vanessa Walton-Bone shines as the imperious Lady Bracknell who delivers her snobbish opinions as if they were unassailable truths. Marla McLean is delightful as the calculating and passionate Gwendolen and Chilina Kennedy's girlish Cecily is alive with youthful exuberance. Elizabeth Richardson does a memorable turn as Cecily's repressed governess Miss Prism. The pacing is crisp and brisk so that the play's two and half hours fairly fly by. Filled with many oft-quoted lines that elicit chuckles and head-nods, this is a first-rate production of a familiar favourite.

7 Sure Things happening in Halifax from March 25-31