The Khyber building celebrates 125 years with a year of commemorative events, including group show, CXXV. 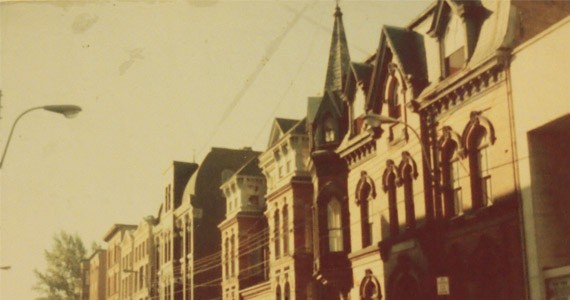 Khyber Centre for the Arts
The Khyber building on Barrington in the 1970s.

"One of the most important ways to save a building is to occupy it," said Elizabeth Pacey of the Heritage Trust, speaking at the Khyber last Wednesday. Pacey was explaining how the gothic-style Barrington Street building came to celebrate its 125th birthday. "The historic architecture really makes it into a landmark building and I think the other reason that it has become important over the years is because it has a public or semi-public use. Even as the Church of England Institute, it was a library, but they also had lectures."

Since its construction in 1888 the Khyber building has been used and occupied in multitudinous ways. Originally home to the aforementioned Church of England Institute, it was used it as a meeting place and club complete with a lecture hall, council chambers, parlour, reading room, billiards room and gymnasium with a squash court. In later incarnations it housed a health food store, a youth clinic and a bar, the Khyber Club, where at one time you could find Lucky Diamond Rich, the world's most tattooed man, swallowing swords, according to Halifax Ghost Walk guide Dusty Keleher, who gave a tour of the building at the exhibition opening reception. "Over the last 125 years this building has meant a lot of things to a lot of different people," Keleher says.

To honour the history of the space and the people who have occupied it, the Khyber is hosting a series of commemorative events throughout the year. CXXV (the Roman numeral for 125) is the first event in the series. Running to March 29, the show presents the work of Khyber members reflecting on themes of legacy, history and lineage.

The result ranges from Levon Campbell's array of rusted objects in Spring Collection 2012---addressing issues of disenfranchisement and the abandonment of Barrington Street, to Shipwrecks 1888, Carly Butler's interpretation of the boat accidents that occurred the year the Khyber was built.

The NSCAD Queer Collective plans on responding to the history of the building later with a project that resurrects the Turret. Between the years of 1978 and 1983, the Turret was a gay social club and meeting space housed at the Khyber. Proceeds of the cabarets and performances hosted there funded the Gay Alliance for Equality.

Robin Metcalfe is the director of the Saint Mary's University Art Gallery and was the chair of the GAE when it was housed in the Khyber.

"It was already an unusual organization in a time when many gay organizations were predominantly male and white-collar or academic," Metcalfe says. The GAE by comparison had a large female membership and was mostly working class.

Emily Davidson is one of the organizers of the Turret resurrection project, which will be restoring the third-floor turret space to what it would have looked like at the time--- complete with paint job and the recreation of a contentious mural, including a dance party March 23 and a cabaret March 27. She says the political history of the building is inspiring.

"It's a nice way to remind folks that the history is maybe more radical than you would expect," Davidson says. "I see the Khyber as a space that could be more actively political. This is a way of sort of reminding the community---showing that a social space doesn't have to be apolitical."

In whatever way the Khyber is occupied in years to come, this gothic landmark will continue to make an impression both on the street and in the hearts of Haligonians.