Inventions, a beautiful collaboration with Nick Everett and Willie Stratton makes for a major, yet intimate, performance. 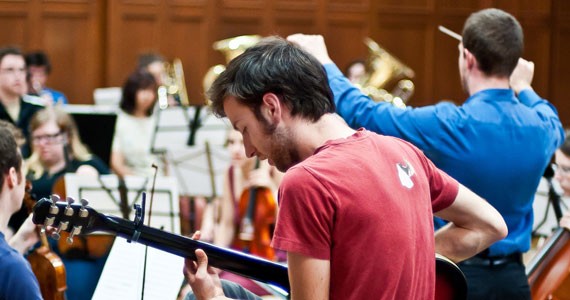 Bringing the King's College Orchestra to a house show might have been a bit of a challenge, but bringing the house show to them is bound to result in a little magic. The idea came up when the KCO's executive director and conductor, Faye Bontje and John Bordagus, were brainstorming for the 2011/2012

season, and Bontje wanted to capture the heart of an intimate living room performance onstage with the orchestra. She immediately thought of Nick Everett, who immediately thought of Willie Stratton and Inventions, a KCO/indie music fusion, was born. "Hearing our songs played by an orchestra, 70 strong, is overwhelming," says Everett who, along with Stratton and some meticulous work from Bordagus, collaboratively carved out 10 orchestral scores. "I've been singing along with Willie's songs and every time we get to the end I lose myself with laughter. It's beyond what I imagined the songs to ever sound like."