The life and times of Pizza Corner

When the trio of pizza joints turned into a duo, did it put the nail in Pizza Corner’s coffin? Or is this Halifax legend unkillable? 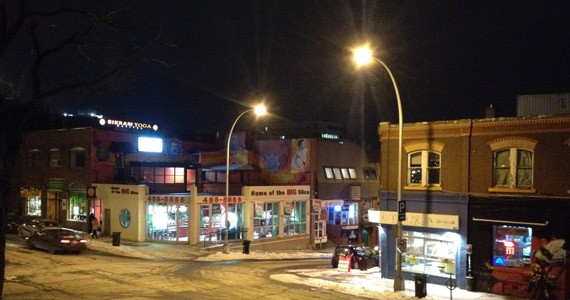 Angel or devil, blessing or curse, Pizza Corner was, at once, a slice of heaven and the third circle of hell. Perhaps it still is. All I know is once you've scrambled out of your 20s and left late nights downtown behind you, it's easy to think of it as nothing but a neon-lit, pepperoni-scented gravestone of your youth.

Pizza Corner is mythic. In its heyday, three corners of the intersection at Grafton and Blowers were comprised of the King of Donair, Sicilian Pizza and the European Food Shop. It was a sort of Bermuda triangle, where nothing but hunger pangs and the last few shreds of a night's sobriety and self-respect disappeared in the gulf stream of drunkards hurling themselves through downtown's ocean of late-night follies.

It can seem like all late-night paths lead to Pizza Corner. Rock shows and retro nights, dance parties and drinking binges can all be capped off with slices of pizza large enough to fold origami-style. Long-suffering (and doubtlessly philosophical) cashiers still spend their nights handing donair sauce over counters like nurses with pill cups filled with prescriptive cure-alls. It's the storm before the calm.

In the harsh light of a quiet Sunday, paper plates are pressed into garbage cans like dirt in a shallow grave. Tinfoil ghosts blow around Grafton Street on dusty wind. Seagulls and starlings lurch and lunge like tiny vultures, picking at bready bones scattered carelessly on the ground.

It's fitting that the Presbyterian Church of St. David, on the fourth corner, sits atop a 200-year-old graveyard.

Pizza Corner is perhaps the perfect example of the Jekyll-to-Hyde transformation downtown Halifax undergoes in the ungodly hours that bars here finally wind to a close; a fleeting revulsion that appears to trample and injure, only to disappear again in each innocent morning light. At the height of its notoriety, that corner was known for beatings and swarmings as it was a folksy local landmark that lured in world leaders at the 1995 G7 Summit to feast on donair. Hell, the height of notoriety has nothing to do with it: there was just another brawl that ended in a stabbing there in December.

It's been around two years since King of Donair moved out of its Blowers and Grafton location. While there hasn't likely been---and there may never be---any end to kids on a slice run, as poutine and frozen yogurt creep further towards the intersection you can't help but wonder when a corner becomes nothing more than a corner. But, then again, can you ever really end a myth? Fro-yo comes and goes. Pizza is forever.