The Lifeblood of Pineo & Loeb

The EDM duo goes all in on its debut album, out September 29. 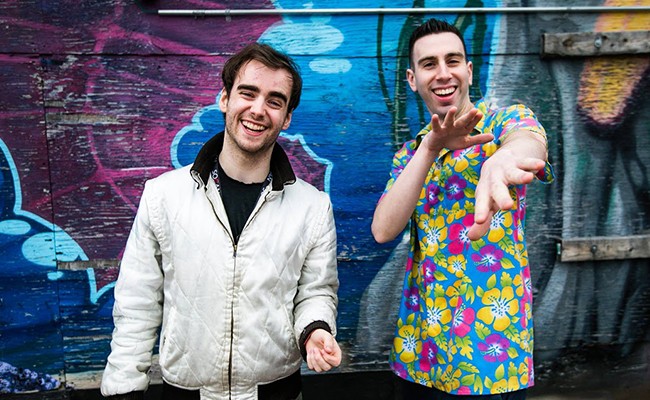 Local EDM duo Pineo & Loeb will release its first album, Lifeblood, on Friday. "This is us as a body of work," says Mitchell Pineo. "It's a statement of our sound and what we do and what we love."

The two musicians, both 25, hang out in their home studio in JR Loeb's bedroom. Incense smoke wafts from its holder on the keyboard, curling around the edges of computer screens and event posters. The room tells their story and exemplifies the high-energy-versus-ultra-chill dichotomy that rules their music and creative partnership.

Pineo and Loeb's names are well-established in Halifax. They joined forces circa 2011; since then, they've had a longstanding residency at Pacifico and become veterans of local events like DalFest and Evolve. Together, they've toured Canada, survived natural disasters at gigs abroad and kicked it while playing five-hour sets.

Pineo is the self-proclaimed "nerdy one" whose name appears in an electric red, '80s-style font on the album cover, while Loeb's is a water-like graphic, representing his laidback surfer side. "The album goes through this journey," says Pineo, as Loeb nods in agreement. The songs "are all conduits of different emotions."

Lifeblood takes off with upbeat party tracks on the A-side and transitions to a moody, contemplative sound for the second half. The duo says the album imitates the highs and lows of human emotions, tying it back to its title. East coasters make up the core of the guest vocalists, including Kayo and Quake Matthews, alongside renowned producers like MSA, who worked on "Uptown Funk"—the variety gives the album a Gorillaz-esque diversity. (If you've ever wondered what Ghettosocks and Skratch Bastid would sound like on the same track as Ashley MacIsaac, you'll find out here.)

"You do it for yourself," says Loeb. "We're laughing the whole time through this process." They keep their sound rooted in dance music, but play with genre boundaries and overlap musical eras to create their unique sound. From here, they aspire to create timeless music that brings people together through a shared feeling of positivity. "There it is," says Pineo. "Take it or leave it."