The north end’s hottest new hang works out some glitches to woo patrons as both a bar and cafe. 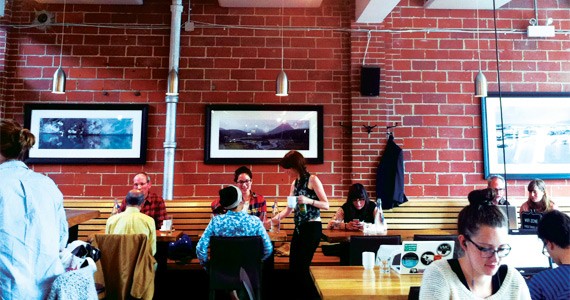 Lion & Bright, the bar and cafe that stole the name of the children's book I was writing about the heartwarming friendship between a white lion and an anglerfish, has its own storied roots in a pair of animals. The name pays homage to oxen: a team of two buddies hitched would often be named Lion (on the left) and Bright (on the right.) In this case Lion is a bar and Bright is a cafe.

The lovely Local Source market is what steers this team of Lion & Bright, and Sean Gallagher brings the same commitment to community and passion for local ingredients to the cafe and bar. The look is what has become a common one in restaurants of late: bright and industrial. The tables are beautiful, big slabs of varnished tree trunk. Communal tables, built for work and play, fill up most of the floor.

On my first trip, months ago, the restaurant seemed to be focused on counter service. It was, at the time, a confused mess. Today there is table service. Our server is very friendly and attentive; it seems like a major improvement. My friends are already seated when I arrive, nursing glasses of cold water from a sweaty bottle on the table. I peruse the menu and decide on a latte ($3.75), and then get the fish tacos ($8) and the couscous salad ($6). Allison gets pancakes ($6) and Simon gets a ham and cheese sandwich ($7.5).

Lion & Bright also has a small but thoughtful beverage program, with an especially nice focus on local craft beers, bourbon and whiskeys. We add glasses of Bulwark cider ($8), which is on tap.

The tacos and salad are plated together. Nothing on the menu suggests that you can order a side version of the salad, so it's a pleasant surprise when it turns out that you can ($6, +$3). The couscous salad is just OK. While the menu boasts apple, raisins, asparagus, cucumber and tomato, it is mostly the latter two–flavourless, slightly mealy–that make up the bulk of the salad. The acidic crunch of what apple is present really elevates the salad, and more of that contrast against the mild, creamy curry vinaigrette dressing would have made it more satisfying. A surprise addition of kale leaves does add some good heft, though.

The fish tacos are great. Served on two small corn tortillas, the fish themselves have a blackened appearance and are spiced with a warm mix of seasoning that has the heat of cayenne along with some sweeter notes, maybe cinnamon or nutmeg. The charred taste makes it somewhat indistinguishable, but it's good. (I like char!) A red cabbage slaw sits on the bottom and there is apparently a cilantro yogurt, but those things are lost under the pile of sprouts. It's a lot of sprouts. More sprouts than a taco could ever need or want.

That same generosity pays off on the pancakes. There is a veritable sea of strawberry/cranberry/apple compote and bacon atop the two yoghurt cakes. The pancakes themselves are a fluffy golden brown and the compote is sweet and tart, both friend and foil to some maple syrup that is served on the side. It's a nice, filling plate.

The ham sandwich is the least impressive item. The sandwich is served on a thin baguette, with nothing on the side. While there is lots of cheese, a fine sandwich, the poor presentation leaves a bad impression. This is a problem easily solved by making the side salad option more clear, or even just throwing a few pickles on the plate.

It's not perfect–and it's definitely not the story I had imagined–but Lion & Bright seem like they're on track for a happy ending.