The long, winding road to getting a bike lane built in Halifax 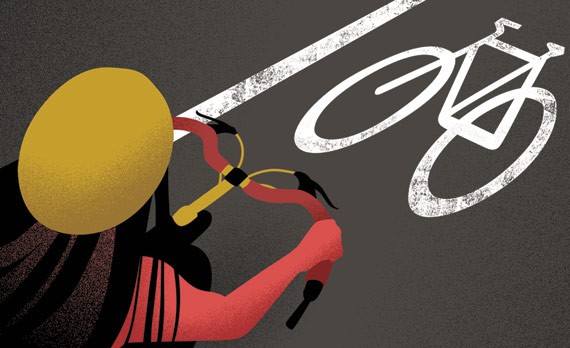 Bikeway planning in the Halifax region sometimes rolls on smoothly, but getting an actual path built in this town can be a bumpy experience. Blueprints are drawn, the public is consulted, plans might get tweaked, projects are approved, anti-cycling outrage is duly noted, project cash is earmarked—and then bike trails are occasionally subject to long delays.

For example, about 50 people attended an information session in metro for a proposed Bedford-to-Burnside trail for cyclists and other users that would be built when the province eventually constructs its long-awaited Highway 107 extension. That public meeting was in 2011.

An approved bike lane planned for Hollis Street in downtown Halifax has been years in the making. People attending public information sessions hosted by municipal staff a year ago were told the lane on the busy one-way road would be installed last summer. Community concerns prompted design changes.

City hall staff recently have said the Hollis Street lane would be built sometime this summer, but a new wrinkle delayed its installation yet again.

The budget for the bicycle lane, which is to be only for southbound travel and “protected” from vehicular traffic, is $175,000. But quotes submitted to city hall exceeded the project’s estimate. Costing now must be resolved before any work proceeds, a municipal staffer told CBC last week.

Eric Jonsson of the Halifax Cycling Coalition says the group understands the frustration of both city hall and the bidding firms, but at the same time, “we’re disappointed that it’s taken this amount of time.”

At Dalhousie University, an on-again off-again bike lane for a section of the school’s campus is finally on again. The two-year pilot project, for both sides of a four-block stretch of University Avenue, was announced last September.

Halifax council gave the project its blessing last year, but later overturned its decision during an in-camera meeting. Council directed city staff to gather public feedback, in addition to a consultation done by university employees, so that meant the planned bike lane was temporarily shelved.

The pilot project at Dal should be starting this year. The provincial government has committed $150,000 to the cycling lane.

“We have a deal in principle with Dalhousie and are now in the process of working out the final details,” Halifax spokesperson Brendan Elliott tells The Coast.

Across the harbour, the proposed multi-use path to allow cyclists to travel between Bedford and the Burnside industrial park is part of the municipality’s active transportation plan. It’s a bikeway that would be several kilometres long, but it won’t be built until the provincial government puts in the Highway 107 extension (also known as the Burnside Connector).

The project is part of a toll-road study the province is doing, research which isn’t expected to be finished until next year. According to media reports, the seven-kilometre highway project has raced past original cost estimates and is now more than $130 million. The increase is hooked to a planned route change.

Four years ago, municipal staff said there was an opportunity to team up with the province on the Burnside Connector and city hall would potentially save millions of dollars as a result. It’d cost substantially more if the bikeway was to be a stand-alone project done solely by the municipality.

The Coast's first TikTok: Regional council votes to look at looking at changes for pedestrians and cyclists during COVID-19