The making of Atlantic salmon

The Canadian government recently approved, without fanfare, the world’s first genetically modified fish to be produced in PEI. The Ecology Action Centre has a problem with that 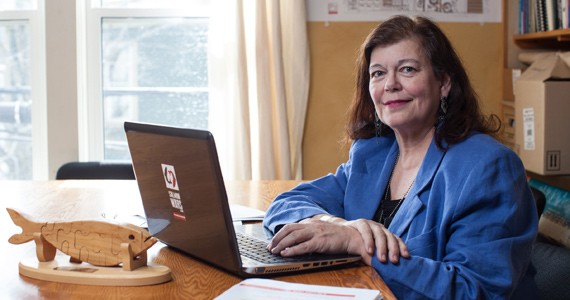 Created by micro-injecting genetic materials from a chinook salmon and an ocean pout into the egg of an Atlantic salmon, the new GM fish grows about twice as fast as regular Atlantic salmon, shaving about 18 months off the time it takes for a salmon fillet to make it to your table.

Under the November approval, AquaBounty Technologies Inc., a US company with an ACOA-funded facility in Prince Edward Island, can manufacture GM salmon eggs in PEI, with permission to grow out some fish within the contained facility. But the bulk of the eggs are destined for a land-based aquaculture farm in Panama, where they will grow into fish, and then, pending approvals by the FDA and Health Canada, be sold as food in North American grocery stores.

The global precedent of a GM food fish has not been lost on the Ecology Action Centre. Along with west coast partner group the Living Oceans Society, the EAC is hoping to give the historic approval a little more scrutiny. And so with help from the lawyers at Ecojustice, the centre is taking the federal government to court.

Its legal case focusses on the idea that Environment Canada and Health Canada failed to get the information they needed to figure out if GM salmon eggs in production in PEI are "toxic or capable of becoming toxic" under section 108 of the Canadian Environmental Protection Act.

Potential toxicity in the case of GM salmon comes from risk of escapes, and the effect that the new hybrid species would have on its originator, the wild Atlantic Salmon, which is endangered in many parts of the Atlantic coast.

"In the case of GM salmon eggs or salmon," says Susanna Fuller, the EAC's marine conservation coordinator, "would they get out into the wild? What would happen if they did? Could they interbreed? We don't know any information [the government] might have used to make the decision and ensure it's not toxic."

This move for a judicial review is a big deal for the EAC, which has reason to shy away from courtroom encounters.

In the early '90s the EAC took the federal government to court over the Point Aconi power plant (a coal-fired plant that promised, but failed, to sustain the coal mining industry in Cape Breton). The Centre lost its legal battle and was ordered to pay court costs, which nearly bankrupted it.

"It gutted the entire organization," says Susanna Fuller, marine conservation coordinator. "When I started volunteering at the EAC in '95, they were still recovering," she says.

So the decision to pursue legal action this time wasn't taken lightly. "We had a lot of discussions internally," says Fuller. Even with environmental law charity Ecojustice providing lawyers, the case will draw heavily on the EAC's resources, requiring fundraising of tens of thousands of dollars to cover staff and spending needed to prepare for the case.

"We decided it was worth it because it's the first approval of a genetically modified animal for human consumption in the world," says Fuller. "At the very least, we had to raise the issue and engage Canadians in a conversation. And the way to do this in a meaningful way was to take the decision to court."

Even before a single court date has been set, the EAC's legal action seems to be bearing fruit, of a sort. A little over a month after serving papers, EAC staffers noticed something pop up via Canada Gazette (the official newspaper of the federal government): On February 8, Environment Canada published a long list of waivers, including one for Aquabounty, exempting the company from providing "data from a test conducted to determine its pathogenicity, toxicity or invasiveness."

This caused concern at the EAC office. In the process of deciding whether or not to approve AquaBounty to produce AquAdvantage® fish and eggs, the government had exempted them from providing information about potential problems the modified fish may cause in the environment.

"It means they're making the decision in the absence of information," says Fuller.

With no dates attached to the waiver, and no details about the nature of the information that was waived, EAC staff started to look into the issue. "When we went back," says EAC marine toxics coordinator Joanne Cook, "we discovered Environment Canada had published no information waivers at all since 2008."

Environment Canada spokesperson Danny Kingsbury says the notices couldn't be published for so long because Environment Canada staff were too busy implementing a new chemicals management plan, one that had come into effect in 2006, over a year before the notification spigot got turned off.

It's worth noting that the Environment Ministers during this time–John Baird, Jim Prentice, Peter Kent and now Leona Aglukkaq–did find the resources to grant the waivers. It's just the final bit of paperwork– a single line of text listed below a standard excerpt of legalese–that was too much work.

Then on February 8, despite years of staff cuts at Environment Canada, the department was able to find the resources to publish six years' worth of notices in a single day.

In all, 163 waivers were listed on the February 8 notice, exempting almost 500 different sets of data from "antibiotic susceptibility" to "acute mammalian toxicity" to "boiling point tests."

"There are rigourous information requirements under CEPA," says Cook, "and hundreds of those requirements have been waived and kept secret. Some of them might be perfectly legitimate. The problem is we don't know. We as the public have no idea what the minister of environment has told these companies they don't have to provide.

"We want to see a very firm commitment that this won't happen again," says Cook, who'd like waivers published as they are approved. "This is not an onerous process," she adds. "Somebody needs to hit send on an email to the Canada Gazette."

Environment Canada doesn't seem concerned about the six-year delay in publishing notices. "There is no time requirement in CEPA 1999 for the publication of waivers," said Danny Kingsbury in an email response to a question over the department's potential violation of its own legislation. As Kingsbury sees it, there may not be a point anyway. "The publication of the waivers notices does not impact the approval of these waivers."

"I know it sounds like arcane administrative back and forthing," says Cook, "but we're dealing with new biochemicals, new petrochemicals, new antibiotics, and new genetically modified plants, animals and fish. The government has not published waivers of information requirements that shape their assessment, in a timely fashion. And when it finally publishes them, they're so vague as to be useless."

AquaBounty's waiver of the data regarding the toxicity of AquAdvantage® eggs was granted in August 2013 on the condition that its PEI facility was sufficiently contained so that none of the eggs could make it out and find their way into a river or stream. Presumably, if they don't get out, then who cares what they may or may not do to the environment?

In an advisory report dated from November 2013, the department of fisheries and oceans agreed that the risk of GM eggs or fish making it into the Canadian environment was "negligible, with reasonable certainty."  However, in the unlikely event of a fish spill, the department concluded that the likelihood of the survival and spread of GM salmon was high.

And here seems to be a dividing point between GM fish proponents and opponents. Some look at the data and say, no problem–a low risk of a high risk is still a low risk. Others look at the same information and conclude when the stakes are high, no risk is low enough.

The EAC agrees, and that's one of the reasons it's decided to throw caution to the wind and engage the federal government in court, again. "This is an important issue globally," says Fuller, "and we should be concerned that the decision is being made in Canada. How these things get approved, what the public consultation process is, what the legal regime for how you would even manage them is. If we don't challenge that in Canada, then we have abdicated our civic duties."