Spreading happiness, one contagiously cheery viral video at a time. 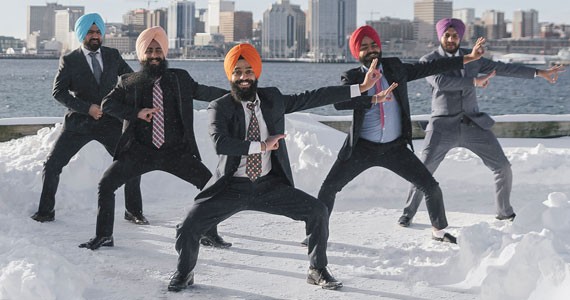 Hasmeet Singh Chandok is an unabashed optimist. His penchant for bright colours hints at this, but the full depth of his sunny outlook is fully revealed within minutes of meeting him. "There is so much kindness in this world that we don't realize," he says, waving his hand.

As the unofficial head of the Maritime Bhangra Group—"All the rest of them are too shy," he says—Singh Chandok's outlook is pleasantly on brand. The group, a revolving set of students from India's Punjab province (including Singh Chandok's brother), have been making Halifax's corner of the internet a little brighter with high-energy dance videos they shoot in rainbow-coloured Pagg (turbans).

"In India, everyone knows this style of dance," Singh Chandok explains. "Sometimes, in my home province, if two friends haven't seen each other for some time and then reunite at a cafe, they'll dance." It feels like a natural progression, then, that when he and his brother came to Halifax they brought a love of Bhangra with them.

The two-minute-ish clips, which feature scenes like high-jumping moves on the rocks of Peggys Cove or quick twirls while shovelling snow (with vivid-coloured shovels, natch), can take much longer to create.

"When we shot the video at Peggys Cove, it took hours. We would go inside, shivering, and watch the video on my phone, hope that no one is out of step," says Singh Chandok, laughing. "And we'd all look at each other to see if it was OK and one of us would shake our heads, and we would go back out into the freezing again."

The effort, though, is worth it.

"I get messages from people having mental illnesses, especially people who have depression," he says, adding the reaction of fans (and the group's newfound fame) still baffles him. "People ask to take selfies with me all the time. We still feel that we don't do anything special, it's just people who make it special."

The surprise stardom has its benefits, however. Singh Chandok explains that each clip is created to raise funds for various causes—including diseases like ALS. A bigger audience means more funds gathered, and allows the Maritime Bhangra Group to spread its happiness to those who need it most.

"When we were raising funds for ALS, we also delivered 1,280 handwritten notes to patients saying 'You matter.' We care about life, we don't care who's life it is. If we can save anybody's life or give them life for a few months, if that goes with money or with time, we can do that.

"Other media try to ask us 'From which religion are you,' but we say it's from all the religions," he adds. The message, it seems, is as sunny as it's deliverer: Be happy, help others and make the most out of life.

"If you take Mahatma Ghandi, if you take Martin Luther King Jr., they didn't do things for their own satisfactions. Considering them as our role models, because they did things for others and not for themselves—I mean, there is no way we can compare ourselves to them but we take inspirations from them," he says. "Practically, no one should be sad on this planet."

Maybe it's not just the internet the Maritime Bhangra Group is brightening after all.