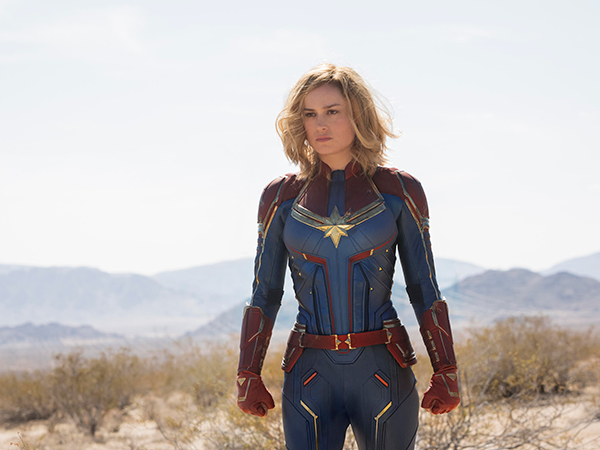 In the utterly pointless argument of Marvel versus DC, it nonetheless remains worth noting that the dour, self-serious DC got its lady superhero movie out first. It's also worth nothing that Wonder Woman is better than Captain Marvel, but still not as good as you remember: Like every superpowered outing—led by man, woman or Groot—it's 20 minutes too long, with one battle too many and a bunch of nonsensical myth-building the actors can barely squeeze out of their spandex.

None of this matters: As Black Panther's incredible success proved last year, what matters is representation. Representing here in Captain Marvel—go read the plot somewhere else—is Brie Larson in the lead. Larson, who won an Academy Award at 27, has taken that power and used it only for good: It is she who demanded diversity in the press corps, causing the Toronto and Sundance film festivals to change their accreditation processes; it is she who cast the rising Mamoudou Athie as her co-lead in the her still-unreleased directorial debut Unicorn Store and it is she, doing her presenterly duty as a past winner in 2018, who refused to clap as Casey Affleck, accused of sexual harassment by two women, accepted his Oscar.

Captain Marvel struggles with the set-up—the first 20 minutes is a bizarrely coloured space adventure nearly sunk by sci-fi gibberish. (It evens out once they get to earth.) Anyone who saw Larson's finely wrought work in The United States of Tara knows she is equally adept at drama and comedy and Carol Danvers is allowed both, a rarity in this universe. Marvel is known as the "fun" one but it's really just Robert Downey Jr. strutting through with a one-liner in amongst a bunch of costumes and earnestness—Danvers is allowed to be funny as an actual personality trait. Once the various betrayals and double-crosses reveal she is not who she thought she was, Larson gets even more notes to play. And as for the battles—Captain Marvel is essentially undefeatable, so you get to watch her kick asses from here to outer space, on screen as in life.