Not to be confused with mokka

Oh, The Museum of Contemporary Art. It's on Grand Street in downtown LA, where lots of people don't seem to go, but should. It's 30 years old and to celebrate, has a huge, exhausting show.

A room of Rothkos. Several Pollocks, including the magnificent "Number 1, 1949". Judds, Flavins, Chamberlin (the three Muskateers of Marfa, pretty much). A room of Robert Irwins. Several works by Agnes Martin (born in Saskatchewan, and represented very nicely at the Dia:Beacon Museum). 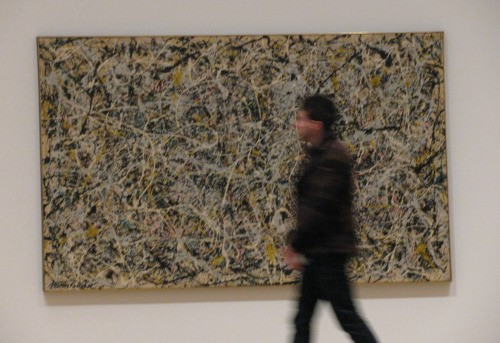 For photographs, a room of Diane Arbus and a room of Nan Goldin among others. Too much for one visit. We were there on a Thursday evening, when it's free, and when we left, Frank Gehry's Disney Hall was there, next door, in the night like a ship from some finer planet.