The music world is waking up to Halifax's Nap Eyes

Demure genius Nigel Chapman and his band are going big. 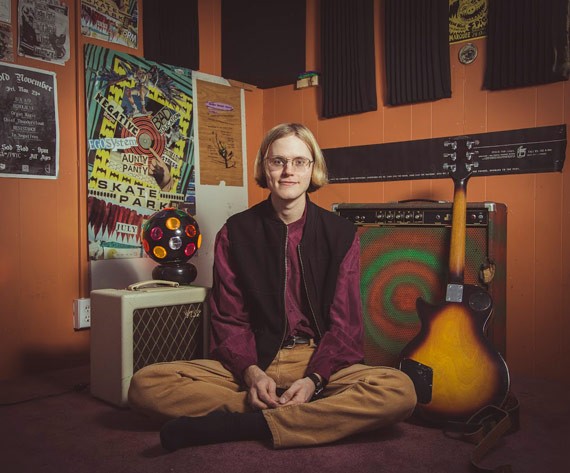 Nigel Chapman is a shy man. Onstage, with his band Nap Eyes, he's reserved. He looks down at his guitar and sings with his eyes closed. He'll nervously adjust his glasses or push his blond hair aside. He's gracious for the attention and he thanks the audience and his bandmates repeatedly. In between songs, when he feels anxious and unsure of what to say, which happens every few numbers, bassist Josh Salter chimes in with something funny. Guitarist Brad Loughead crouches into his pedals as drummer Seamus Dalton slouches into his rhythm. It's quiet at first.

Soon, Chapman is singing lyrics with shaky confidence. He stands taller as he gets lost in his own narratives: "But if I go down, I'm not taking you with me," he sings, clear, deep and emotive. "It's only myself in the end." Track by track, he reveals his isolating but universal worries. He shows fear, conviction, loneliness and hope as the band creates layers of moods and textures that are tempered by Chapman's feelings—a jazzy bass and drum line here, a bluesy guitar run there, a rock and roll crescendo and then silence once again. Playing and listening seem equally cathartic.

In the last six months, the palpable timidity and raw power of Halifax's folky rock band has gained attention around the world. After playing folk songs for a few years on his own, as The Mighty Northumberland, Chapman assembled some of his friends to build his songs into something more. In March 2014, Nap Eyes released 200 limited LPs of its debut Whine of the Mystic with the small Montreal imprint Plastic Factory.

As an independent release, the album passed by without much fanfare. So Chapman approached an Ontario label, the influential Can-rock outfit You've Changed Records, which had heard of Nap Eyes because the band had done a few tours and played the label's closely affiliated New Brunswick festival, Sappy Fest, in 2012 and again in 2015.

Last July, You've Changed re-released Whine of the Mystic with an American partner (Paradise of Bachelors) to accompany the band's US and Canadian summer tour. It got immediate traction. Since then, huge music publications like Pitchfork, SPIN and Stereogum, and MOJO Magazine and Uncut in the UK, have praised Nap Eyes' songwriting as some of the best of its kind.

On Friday, the band's highly anticipated second album Thought Rock Fish Scale will be released in Canada and the US on each respective label, and it's been streaming online in the UK all week. Recorded live off-the-floor 18 months ago at Chapman's family cottage in Pictou County, the eight-track album seems to have renewed the tired spirit of indie rock, a genre that has become predictable, if not overwhelmingly generic.

In the lyrical aspects of his songwriting, Chapman has observed the more vulnerable side of the American folk tradition. Frequent comparisons by critics to Lou Reed, Bob Dylan and The Modern Lovers' Jonathan Richman seem drawn from Chapman's honest presentations of everyday feelings, and perhaps the influence of some of his favourite songs. "And you know there's something wrong here, but you don't know what it is," Chapman sings on "Roll It," a Nap Eyes song that might be his personal "Ballad of a Thin Man." But his metaphorical flourishes move the lyrics from forthright words to figurative poetry. Images of lions, chains and binds, Biblical fires and religious allusions, sensations and nature recur throughout Thought Rock Fish Scale.

Meanwhile, the sonic contributions are drawn from the musical backgrounds of the band itself, which gives Nap Eyes its genre-elusive quality and which appears to be one of its most appealing traits. Salter and Dalton have played together in the '60s-pop-inspired Monomyth since 2012, each with their own songwriting influences and styles—Dalton on the radio-pop end and Salter on the classic rock. For many years, Loughead has led Montreal pop band Each Other with fidgety melodies. He's also the bassist for Montreal's Homeshake, with its own form of jazz-pop.

Alongside Chapman's rustic three-chord strumming, a relic from his mother's New Zealand heritage and his own appreciation for American folk music, Nap Eyes blends into something that feels classic but new, and familiar but fresh. The songs are invigourating, comfortable and incredibly genuine.

In the last few years, Chapman's enthusiasm for his band has overcome his demure demeanour. Originally from Halifax's south end, Chapman began playing alone as The Mighty Northumberland around 2009. He named his work after the salty shores of summers spent near Pictou, where Nap Eyes hid for a week recording Thought Rock Fish Scale. The area's inspiration on him graces the album artwork. 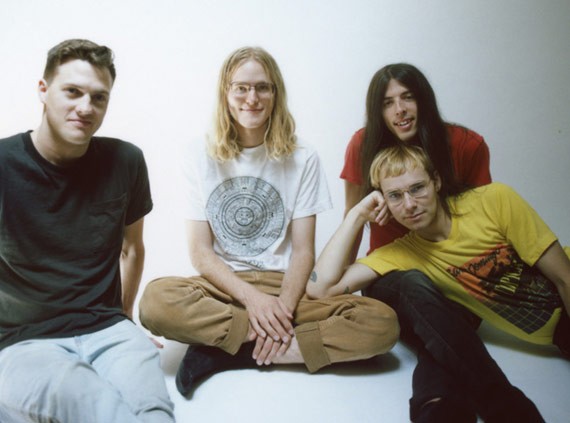 In 2011, Chapman started jamming with Salter and Dalton to add depth and power to his lyrically rich but sonically simple song catalogue. With their contributions, the band became Nap Eyes. After studying sciences at Dalhousie, Chapman worked through the day as an assistant in biochemistry as the band played shows around Halifax. Still, Chapman felt it needed more. So he invited Loughead to play guitar on Whine of the Mystic. Loughead's approach, as well as the freedom he gave Salter and Dalton, created the band we hear now.

"Generally, Nigel brought the bare-bones versions of songs to us," says Loughead, who has lived in Montreal for several years and joins the band for recording, festivals and tours. "As a band, we'll work out what direction or style to go in, focusing on mood of the song. Other times, we'll just record a jam and stuff will come out of that. There's a lot of room for improvising live. I often make up different parts of the songs we're playing."

This approach manifests itself in the band's relationship as much as in the lyrics. On "No Fear of Hellfire," a meditation on fearlessness and maybe love, Chapman sings, "You follow, I follow. You follow, and we fall in," as the versions of the song vary greatly in length and sound dynamics.

No two Nap Eyes sets will sound the same. "It's fun to give a little more differentiation to the songs. Even the bass isn't 100 percent set in stone," says Salter, who moved to Montreal with Dalton last September, leaving Chapman as the last member in Halifax. "We make decisions on the fly and the songs change based on feeling or the time constraints of the set." They hold a relaxed attitude towards performance.

Partly, Chapman needed the rest of the band to accomplish anything. Despite his excitement and impulse to write and perform, Chapman's habits of over-analyzing his work can be an impediment to completing it. This thoughtfulness, for better or worse, is the strength within his songs.

"There's a whole side of this that just wouldn't happen without my bandmates," says Chapman. "On a practical level, the songs get played or recorded because I'm collaborating with my friends. If it's just me, it's easy for my mood to change, so even if what I'm doing is good, I'll start to sabotage it or I won't want to finish it or I won't like this song anymore. I need the encouragement and I really benefit from people helping me."

More than anything, Chapman's self-doubt drives his creative process, and it's the most relatable theme on Thought Rock Fish Scale.

"I feel strong feelings of self-consciousness and anxiety, like people don't understand me. I feel like an outsider," Chapman explains. He's a logical thinker and has a tendency for tangents. "Maybe your friends and loved ones know what's good for you, but only you can see the truth for yourself, everything has to be understood by the self, and there's a kind of righteousness that comes from that, and the confidence it takes to be yourself.

"I think that's a theme in a lot of my songs," he says, pausing. "Because I think realizing everyone is a completely different individual with a completely different destiny can be a source of deep strength in an individual's life, but it's a very isolating feeling. But this is the thing that helps, music. Music helps a lot with that process. It gives me the confidence to fail and to be in touch with the positive and negative to come to meaning."

Nap Eyes makes complex human sentiments feel natural. In essence, the band has created a way to enjoy some of the more difficult feelings we ever experience. Chapman says he's grateful and humbled by everything that's happened for Nap Eyes in such a short amount of time. The group is already working on the next album and will tour throughout 2016, including a swing through the southern US and a trip to the South by Southwest festival in Texas.

Nap Eyes has crafted a special album, and has a unique kind of musical power. "Nigel has his own way of communicating," says Salter. "It's maybe a little less concise, but if you follow the thread, it's usually worth while, and pretty true." a

I think "Mixer" is the strongest one. The spacing in the music, the narrative, the musicality and interplay between instruments. It is a little jazzier than the rest.

"Lion In Chains" is crazy. You can really hear the room in these recordings which teleports me back to our little Pictou vacation. A lot of other recordings I've done aren't tied so directly to a time and space for me due to the process being scattered and jazzed out, but this record is a very vivid reminder of a super cool time for me.

Right now, it's "Lion in Chains." I love the laid-back rocking chair feeling, and "Trust" is just an excellent pop song.

I love a lot of the songs. I think I love all of them, but then sometimes I don't love any of them. But I do love them. They all seem to fit together. They all mean a lot to me.

Last year, after Canada's You've Changed Records and US label Paradise of Bachelors re-released Whine of the Mystic, stellar reviews for the album and the upcoming LP swirled around some of the world's most prominent music publications.

"Unkempt rock songs that are steeped in tradition yet impossible to pin down. Nigel Chapman sings with an observational deadpan that echoes back to the likes of Lou Reed, Jonathan Richman, and David Berman." —Chris DeVille, Stereogum

"Musically plainspoken and direct. There's enough rhythmic jangle and lead twang to have it scan as 'rootsy' or 'folksy' even though Nap Eyes don't actually appear to be a folk or roots band." —Ian Cohen, Pitchfork

"A ragged splendour, one of the best things in ages." —Sean Michaels, Said the Gramophone

"There's a lot of good connections one could make listening to something so clearly laboured over but also seemingly effortless. If you haven't been listening to much rock music lately, Nap Eyes will make you remember why rock's good in the first place." —Duncan Cooper, The FADER