Deeksha Bhaskar is the real deal

The up-and-coming restaurateur and her father focus on quality and authenticity at Rasa Flavours of India. 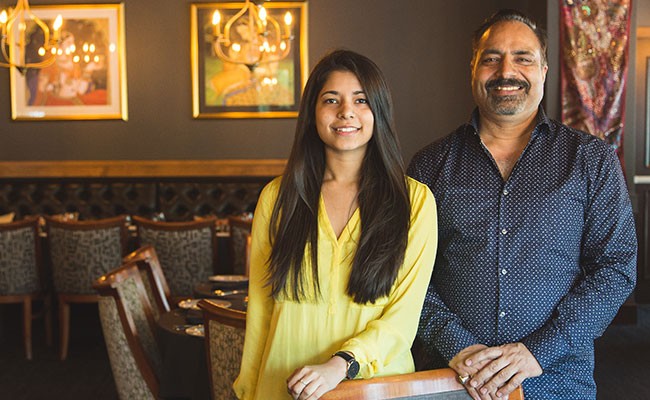 Twenty-one-year-old Deeksha Bhaskar grew up exposed to the food industry. As the daughter of a prominent restaurant-owner in Gurugram, India, she and her sister spent a lot of time visiting restaurants with their dad.

"Whenever we'd be somewhere, he would tell us what each place was doing right and doing wrong," she says. "We've gone to small local restaurants as well as one of the best five-star hotel restaurants."

It's no surprise, other than maybe her young age, that she is now the co-owner and manager of Rasa, which she opened on Birmingham Street in May with her father Bijay Sharma.

Bhaskar, who is starting her fourth year at Saint Mary's University in September, moved to Halifax to study psychology in 2015 with no particular business ventures in mind. When Sharma was visiting his daughter last summer, he began thinking of possibly moving here as well. Then he found out The Fireside restaurant's owners were looking to sell.

"Home is where your life is and he wanted to create a life here. The first step in that process is 'What work am I going to do here?' We clearly realized the need for an Indian restaurant in Halifax," Bhaskar shares. "It seemed like a perfect fit and we decided to take that on."

The daughter-father duo took on The Fireside in October and kept it running for the winter season before shutting down in April and fully transitioning the place into Rasa. This gave Bhaskar and her father time to learn how the business culture in Canada differed from their experience in India.

Bhaskar says they wanted to open the restaurant earlier, but struggled in finding authentic Indian cooks with relevant experience.

"Our cooks are people who have been cooking Indian food for decades now and they've worked in the best places in India. It's as authentic as it gets."

To Bhaskar and her father, this level of experience is important because they want to represent Indian food, culture and service in its most authentic form, something they feel is lacking in Halifax.

"When people think of Indian cuisine they don't think of it in terms of fine dining. They think of it more as a take-out option when you're looking for something spicy, but that's not how I see it," says Bhaskar.

Every detail of their service has been considered, even something as simple as pouring water into every glass before a customer asks or providing damp towels for every customer before they start their meal. This type of dining experience is not something Bhaskar has seen in any local Indian restaurant.

The most important element in showcasing this authenticity is in the menu. For now, they are serving Indian dishes popular in the western world, which come from the northern regions of India. This includes anything tandoor related, naan and butter chicken, but they wish to expand their menu to include southern, western and eastern Indian dishes in the near future.

"We would like to bring those different dishes to the city, but it goes back to labour shortage," says Bhaskar. "We require that experienced team."

The family hopes to expand by opening more restaurants in the city, but for now they are focusing on this location.

"It's been good so far. Halifax is patient and they have been a supportive community."