London looms and here’s why you should be excited. 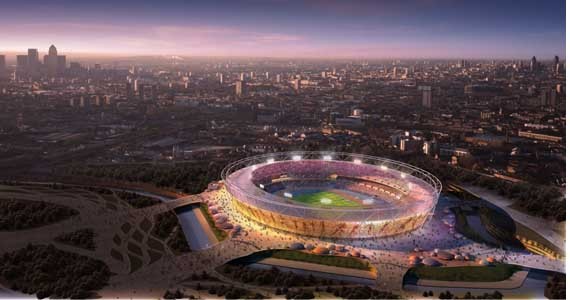 Are you excited to become briefly emotionally attached to freakishly athletic individuals simply on account of their nationality as they compete in games of which you don't know the rules? I know I am.

There's something instinctual about caring, even a little, about the Olympics---even the staunchest sports Luddite will admit they might tune in. Which is, if you think about it, a little unusual. Events like the 3,000-metre steeplechase and equestrian dressage don't exactly have a raving fan base, and there are few popular team sports with recognizable major-league players (with these London Olympics featuring just soccer and basketball with baseball's 2006 elimination).

Can we go back to the fact that "equestrian dressage" is a sport? Can I have a gold medal for stylish Chinese male dressage?

The Olympics (July 27-August 12) work largely because they're simple. It doesn't matter if it's by swimming the quickest or through complicated gymnastics scoring: We all know gold is sweet, and a podium finish is easy to understand. And with each seasonal Olympics happening once every four years, big names shuffle on and off our consciousness with regularity, making them a justifiable one-off dalliance for those with passing interest in sports. (Helpful tip: You can always identify Canadian Olympic stars by examining Roots and Home Depot ads.) Of course, it's also a decent surrogate for something for people to stare at in sports bars and on patios during that terrifying two-month period where football, hockey and basketball are all in their off-seasons. Who knows what kind of war zone Pizza Corner would be without the Olympics to soak up this pent-up testosterone?

These London Olympics come with a heaping helping of hype, too. Speedster Usain Bolt and the ripped, unavoidable body of swimmer Michael Phelps return in London. For Phelps, it will likely be his last Olympic hurrah; Bolt, on the other hand, has said he's already planned his gold-medal-winning speech. Meanwhile, Winnipeg cyclist Clara Hughes hopes to win her seventh medal, which would make her Canada's most decorated Olympic athlete. Basketball diehards will track the every move of the American squad, which might legitimately be the best since the 1992 Dream Team, whose 12-man roster featured 11 eventual Hall-of-Fame inductees. If medal-less hurdler Perdita Felicien makes the cut, she'll be everyone's favourite story of redemption after tripping off the first hurdle in the 2004 games, where she was heavily favoured to win gold. And in Britpop news, the Olympics' concert series will feature Blur's last-ever live show.

Plus, because it's an extremely complex beast to organize, there's always plenty of comedy gold to be mined. This year's Olympic mascots---which have, in recent years, become over-the-top absurd---look like misshapen, rejected Pokémon. (Why not just return to the original Greek mascots of Aris-turtle, Hippo-lytus and the ever-adorable Wrath of Zeus himself?) And as part of the concert series, organizers asked The Who to perform and reached out to drummer Keith Moon, who died in 1978. (I'm still hoping he makes a hologram appearance.)

So don't feel like you have to jump through any Olympic hoops here---it's summer games time, and the livin' is easy.

Adrian Lee made the seemingly inevitable move from Halifax to Toronto in June to work at The Globe and Mail.