A Saturday at the market is a busy affair. The warehouse-style building at Pier 20 is packed, filled with brightly coloured flowers, fresh vegetables and yummy smells of coffee, cupcakes, samosas and Jamaican beef patties. Mary Nkrumah is ready to work. The day before, she spent $135 on lamb, bought from a stand not far from her own. Even early in the morning, she already has customers pushing through the crowds.

A change to the market layout has Nkrumah worried, however, about the future of her business and the diversity of the Seaport Farmers’ Market.

By July, Nkrumah’s business, Mary’s African Cuisine, will be out of the market’s main foot traffic area and relocated instead upstairs on the mezzanine. The market’s management, the Halifax Port Authority, is envisioning a “prepared food village,” modelled after a mall food court. Six vendors—Viji’s Veggies, Mary’s African Cuisine, Pierogies 4 U, Stella’s, Turkish Cuisine and Amin’s Indian Food—have been told they must move to make room for more farmers.

All six currently make up most of the market block where prepared foods are sold. It’s bordered by Julien’s Pastry Shop and The Cake Lady, neither of whom have to move.

“It doesn’t sound right,” says Nkrumah. “I would be OK if everything we call ‘ready-to-eat food’ is upstairs.” 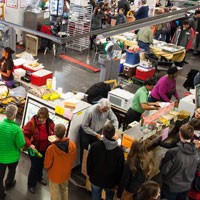 The changes come out of a 2013 public consultation put on by the Halifax Port Authority. Many artisan crafters already moved to the mezzanine June 2014, and this is the next stage. The prepared food vendors tend to only serve a couple days a week, and are on short-term contracts. They’ll join three other prepared food vendors already upstairs.

The result will be a full block of ethnic food vendors moved upstairs—and out of sight. It will present an image that’s unlike the “well-mixed” Halifax Nkrumah has come to love since moving here from Ghana.

“That is how you should be when you come to the Seaport Market. We just don’t see only the farmers or whatever,” she says. “You see what Halifax is made up of. Halifax is mixed. Why is it you go to a space and it’s not like what you see outside?”

The relocation process, says Port Authority communications advisor Lane Ferguson, has been well-communicated since its start. “Ethnicity has nothing to do with this decision.”

He might be right, but this wouldn’t be the first time a farmers’ market had been inadvertently whitened. Markets across North America have been studied for their unvaried makeup. Scholars Alison Alkon and Christie McCullen, for instance, have investigated the problem in Californian markets. 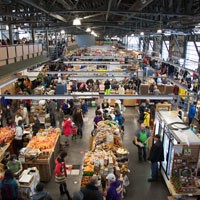 “Market participants valorize the predominantly white vendors who ‘grow their food,’ rendering invisible the low-paid, predominantly Latino/a workers who do the bulk of the cultivation,” they write.

Their research in Whiteness and Farmers Markets (which you can read here) describes how the affluence and whiteness of markets “can inhibit the participation of people of color in alternative food systems...and can constrain the ability of those food systems to meaningfully address inequality.”

The relocation conflict at the Seaport Market has caught the attention of several local groups fighting for a more diverse Nova Scotia—including the African Diaspora Association of the Maritimes, the Black Business Initiative and the Ghanaian Association of Nova Scotia (GHANS).

“The current administration of the Halifax Seaport Market has stated that it is not their intention to relocate any vendor based on ethnicity,” George Katsriku, president of GHANS, writes in a letter submitted to the Market’s management, “but the result of the move will mean that one corner of the mezzanine floor will become an ethnic food court.” 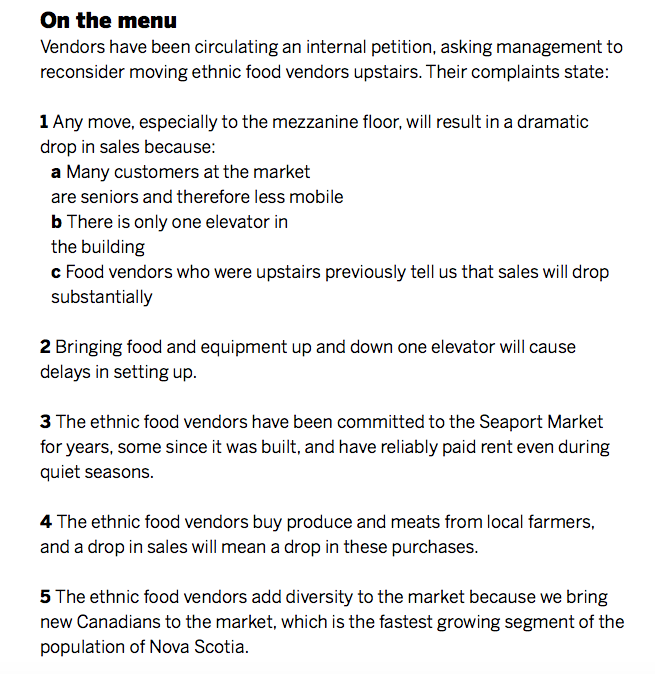 Mary Nkrumah is one of few vendors involved who’s willing to speak openly about this conflict. Others worried about the move, and how the change has been communicated, but were scared they would be penalized for speaking on the record.

“A lot of us selling the ethnic food here are immigrants and for some reason we had a fear: if we don’t do what the management wants, they will take our spot,” says Nkrumah.

She speaks up, she says, because she’s financially stable as the owner of Kick Cafe, at the BMO Soccer Centre. Her husband, Jonathan Roberts, is also a professor at Mount Saint Vincent University.

Stable or not, Nkrumah and the other vendors are worried about a drop in foot traffic. Mohammed Amin, owner of Amin’s Indian Food, once sold food on the mezzanine. People weren’t used to upstairs, so Amin says he moved to the main floor when a spot opened. Otherwise, he “cannot make enough money.”

Viji Ramesh, owner of Viji’s Veggies, says she was told she will be moving, but never given a date.

“We’re not sad,” says Ramesh. “We’re not unhappy or stubborn, but we’re already used to this place and we always feel that downstairs will be more traffic rather than upstairs. That’s the feeling, gut feeling. It may or may not be exact.”

Lane Ferguson says the proposed changes have been “well-communicated, well-documented,” and points to vendor meetings and Port Authority letters as proof. But past issues may be keeping some vendors from openly expressing themselves.

“To be honest, I don’t feel comfortable talking to them,” says Nkrumah. “It’s just because when I talk, they don’t understand me.”

“If there is a vendor who is concerned about language barriers by all means they should be coming forward to talk to us, to work through those concerns,” says Ferguson. “It’s a difficult one to talk to because we have been very open and upfront with all of our vendors, and all I can say to that is if people have concerns they are not only invited but encouraged to bring those forward.”

Ferguson says they will advertise to direct customers upstairs and will work with anyone concerned about transporting supplies up the building’s sole elevator each week. In the end, he says customers will have an easier time finding lunch, and food vendors will have more time to chat and build relationships with customers.

“Any time you have change, there’s always some trepidation from whomever’s going through the change,” says Ferguson. “Our goal with this is to grow business through the market.”

Both management and vendors want a healthy and successful farmers’ market, but isolating some of Seaport’s most flavourful outlets makes Nkrumah worry about what’s to come.

“Our businesses are going to go down,” she says. “Those who can’t anymore will just say, ‘Let me stop this. Let me stop coming to the Seaport Market to sell.’”