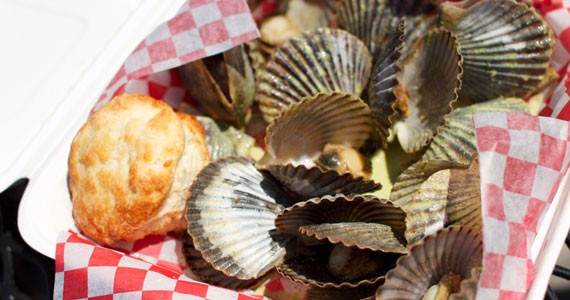 It was only a matter of time before longtime pals Nick Budreski and Renée Lavallée put their masterful minds–he's a seafood distributor, she's the Feisty Chef–together in the name of good eatin'. But the collaboration came to fruition last year when Budreski bid for a waterfront stall, hoping to open a deep fryer-free shanty to sell his fresh-caught seafood seasonally. "When I go travelling I always want to hit up the small takeout places, where you can sit outside and get something really fresh and good," says Lavallée. "No one was offering oysters on the waterfront unless you went and sat in. We wanted to make it a little more accessible to people." By late May The Shack was open for business, operating pretty minimally with refrigeration, a couple of burners and a steamer, serving up hand-picked Black Point oysters and Little Neck clams, a crobster roll (snow crab and lobster), chowder, Bay scallops, steamed mussels and fresh lemonade. "We wanted to be a healthier alternative. Just fresh, meaning that you saw us shucking-the seafood came in from Pictou that morning," says Lavallée. "That's what drew me to have it, knowing we had such a good product to begin with, it didn't need to be tampered with at all." Lavallée hopes to expand on the menu next season by doing some of the prep at her upcoming restaurant within Dartmouth's Two if by Sea, The Canteen.