The Sidney Crosby of dog handlers

Meet Colton O’Shea, the latest young hotshot from Cole Harbour who’s one of the best in his game. 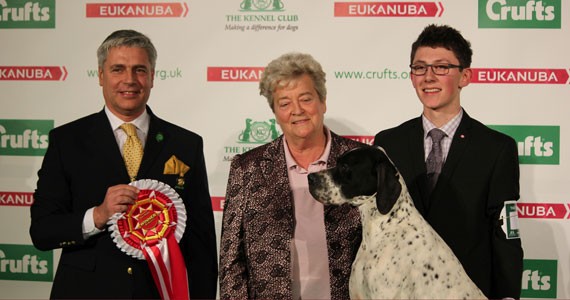 Colton O'Shea wears a suit and tie when he's working, and the sort of business shoes that are hardly fitting for the cardio his job entails. He'd never show discomfort though, especially since his comrades all wear collars too. As polished and unflappable as an English butler, he ensures his well-bred charges are perfectly poised in high-pressure social situations, keeping them out of the dog house---at least until bedtime. That's because his charges are champion canines of the purest breeds, with O'Shea's handling them at such prestigious events as the Westminster Kennel Club Dog Show, in New York City.

"We're in the industry of perfection," says the 18-year-old, pointing to a series of photos of himself with ribbon-winning dogs, each shot fixed to his bedroom wall with four dabs of Sticky Tack. Naturally, when he led a wirehaired pointing griffon to win best in breed at Westminster earlier this year, neither a shoelace nor a whisker were awry.

Aside from being a Grade 12 student at Auburn Drive High School in Cole Harbour, O'Shea is an apprentice to Canada's leading professional dog handler, Allison Foley. Owners pay them between $100 and $600 per show to handle their pooches, depending on whether or not the dog wins a title.

"It can be lucrative," says O'Shea, who earns about $200 each weekend. "But the lifestyle is straining."

In the past year, he has spent nearly 30 weekends travelling to dog shows across North America, usually in Foley's Mercedes cube-van with more than a dozen crated canines hogging the back seats. While on the road, O'Shea's 16-hour work days might demand that he fasten hair extensions into a poodle's mane, pick the crust out of a Weimaraner's eyes, bleach a Labrador's undercoat in a hotel bathtub and be scrutinized by a panel of judges in a frigid arena or sun-stricken field.

Foley says that the job demands fortitude. "Most people in Colton's position would have a mental or physical breakdown," she says.

O'Shea began working with Foley when he was in eighth grade. Although no one in his family bred---or even owned---dogs, he went to a show when he was nine, saw other kids in the ring during a junior round and asked a stranger in the parking lot to borrow her spaniel so he could enter the competition.

For the next four years, O'Shea made his mother and her husband drive him to almost every show in the Maritimes. He eventually got so good that Foley asked him to work with her business, Leading Edge Dog Show Company, which is based from her home near Sackville.

"I could tell he was a promising handler," she says. "Detail-orientated. Competitive." 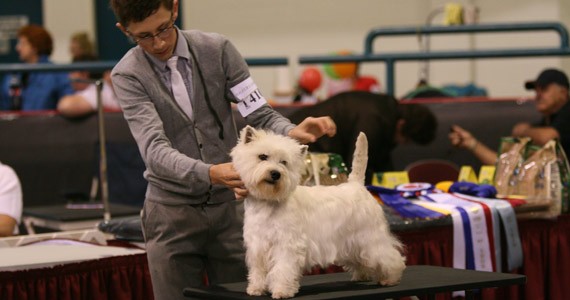 And promising he has been. In March O'Shea became a world champion, winning the International Junior Handling Competition in England. He defeated handlers aged nine to 18 from 45 other countries, including places as far as Thailand. He is the only person in history to represent Canada at the event two years in a row.

In competitive dog handling, the first step begins at 7:30 in the morning, when each handler is introduced to a dog and its owner. The handler then has an hour to bond with the dog and learns its habits before showing it for the judge. As soon as that test ends, handlers are given a second dog that they have to parade around for the judge---but this time the bonding period is just five minutes.

The handlers are done well before noon, but return to the ring at around 6pm for a final round of judging and the awards presentation. The dog O'Shea took into the final was an English pointer named Bob (you can watch the video of their win at thecoast.ca).

"I knew I could handle high-pressure scenarios," O'Shea says. "But still, I was shocked to finish on top."

The junior competition was held as part of Crufts---the world's oldest, largest and most prestigious dog show. There, O'Shea also helped Foley groom the standard poodle, Ricky, who placed first among 22,000 dogs to win this year's Best in Show.

"It was the best case scenario in every single way," he says.

O'Shea's entire school congratulated him, from his colleagues on students' council, to the yearbook editor who will dedicate a page to his victory, to the physics teacher who originally encouraged him to put his slender frame to use as a basketball player.

O'Shea now speaks proudly of his success. And his friends will show up to cheer for him this weekend at a local show hosted by the Dartmouth Kennel Club (see "Going to the dogs," page 10, for info). But this was not always the case.

"In Grade 9, Hanna told me that dog handling was socially unacceptable," he says. "I told her I quit the next day."

O'Shea admits that there is some validity to the stereotypes associated with dog shows, which were famously portrayed in Christopher Guest's excellent mockumentary Best in Show. Venues often provide gender-divided bathrooms for the dogs, created with a tarp and wood chips and fake fire hydrants on the male side, where certain owners encourage their pooches to "go potty" and afterwards inspect their bums for anything undesirable.

Some handlers run their darlings on treadmills to lengthen the reach of their strides. Others will throw a second place ribbon at a judge's feet when told that they did not deserve first because their dog's elbows protrude.

But O'Shea draws the real "craziness line" when he sees a handler storing liver treats inside his cheek or down her bra for quicker access in the arena. "I would never, ever, put liver near my mouth," he says. "And when women put it in their cleavage, it comes out sweltering hot."

But despite the quirks, dog shows come with tremendous amounts of pressure. Both Foley and clients have high expectations for O'Shea, who often wakes to a chorus of barking and whimpering in a hotel room at 5:30am, sets up their grooming station at a venue by seven and pampers each member of the pack until the smell of onion rings lures him to a canteen for his half-hour lunch break.

"A lot of people dream of their dog becoming a champion," he says. "They don't care what it involves."

While about half of their clients live particularly luxurious lives, the other half are working-class citizens who have saved up for years to have their dog "campaigned." Some clients are known as "backers," which are those who sponsor other people's dogs because they see their potential.

Although the number of dog entries in Canadian confirmation shows, known as the "beauty pageants," decreased from 200,000 in 2005 to 145,000 last year, O'Shea and Foley are perpetually busy. "If you want the best of the best, you choose Team Foley," says Donna Johnson, a client who lives in Truro. Between 2011 and 2012, Foley and apprentices led her dog, Nash, to become the top golden retriever in the country.

"Colton is such a genuinely polite young fellow, friendly to everybody," says Johnson. "There can be a lot of politics and hurt feelings at dog shows, but he always takes it as a gentleman."

Although Johnson appreciates O'Shea's work, she does not know that he almost spent his 18th birthday at a show (it was cancelled last-minute due to a storm), that his knees ache and his dress shoes are wrinkled from squatting, that he goes to school an hour early whenever possible to catch up on homework, or that he barely remembers the last time he got to watch an episode of Friends.

"I miss Phoebe the most," he says, "though I always appreciated Monica's cleanliness."

Besides the hectic lifestyle, there is a more central reason why O'Shea would rather have a future as a doctor than a handler, why he is saving his money for a gap year or a science degree rather than a new pair of $700 grooming scissors.

He gets attached to the dogs---to those like Memphis and Charlie who curl up on his feet among down-feather comforters as they fall asleep, their eyelids fluttering behind carefully trimmed bangs. O'Shea handles most dogs for one to three years, but he has to say goodbye when their snouts start to grey or their owners need company.

When they had to return Charlie, a balloon of black static fur who always refused to be left alone, O'Shea could not make himself go with Foley to say goodbye. "I didn't want to make a scene," he says. "I'm sure I would've lost it."

The farewells are doubly hard because the dogs are not just his pals but also the bearers of years of hard work. When they retire, he has nothing more to remember them than a few hairs that cling to his suit jacket and the pictures stuck to his wall.

1. When you’re showing, try to make eye contact with the judge. It shows your intent to win and professionalism.
2. Win and lose graciously. There is nothing worse than a sore loser or winner.
3. Dress appropriately. Suit for men and a knee-length skirt and blazer for women.
4. Put in the work and be determined to learn, or you will never improve.
5. Learn everything you can about grooming your dog. A well-presented, well-groomed dog will win more than one who is not.
6. Understand that each breed is shown differently and learn how handle them.
7. Have fun!