Side guards for trucks could be mandatory, but they’re not. 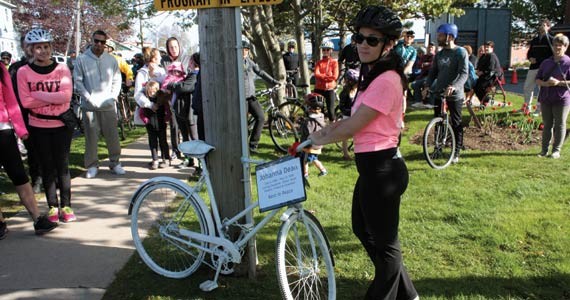 A simple piece of equipment could prevent cyclist and pedestrian deaths, but it's not mandatory in Halifax, and is unlikely to be anytime soon.

Side guards are barriers attached to the side of a truck near the ground. They reduce the severity of collisions by blocking the open space under large vehicles, preventing cyclists and pedestrians from going underneath and being crushed by the wheels.

Last spring, while biking in Dartmouth, 30-year-old cyclist Johanna Dean was killed when she hit the side of a truck. It was a large delivery vehicle with a cab at the front, a large cube at the rear and an open space under the cube.

On May 21 around 3pm, Dean was biking north on Windmill Road. A truck driver was heading in the same direction. The truck stopped at a red light at Albro Lake Drive. When the light turned green, the driver looked to his right—though it's not clear from the police report whether he checked his blind spot—and proceeded into the intersection.

His right turn signal blinked. The truck had turn signals at the back and front, but none in the middle.

Dean died shortly after. She was wearing a helmet.

The driver pulled over immediately and stayed at the scene. Recently police announced he would not face charges or receive a fine in relation to the accident because there's no indication he did anything illegal. Dean's family has said publicly they don't blame the driver.

The Coast reached out to Dean's sisters, but the family declined to comment.

Research shows side guards are effective in preventing cycling deaths like Dean's. After truck side guards were introduced in the UK, fatalities for cyclists who collided with the sides of trucks dropped by 61 percent.

In 2012, the Ontario coroner's office reviewed 129 accidental cyclist deaths and recommended mandatory side guards for heavy trucks. A previous review by the same office asked Transport Canada to look into side guards for larger vehicles in urban areas.

In 2012, the Halifax Cycling Coalition sent a letter to Transport Canada in support of then-MP Olivia Chow's push for federal side guard legislation.

"Side guards should be legislated nationally to avoid further tragedies between cyclists, pedestrians and trucks," then-HCC co-chair Ross Soward wrote. "This legislation will prevent pedestrians and cyclists from falling under the tires of trucks by bouncing them away from the truck instead."

Earlier this year, NDP MP Hoang Mai tabled bill C-603, an act originally introduced by Chow that would ban the manufacture or import of heavier vehicles without side guards.

Transport Canada has argued side guards do not have proven safety benefits, pointing out that Australia reviewed the issue and decided not to make them mandatory. However the guards are mandated in Japan, on certain vehicles in the EU and in areas of the US.

Transport Canada has also argued there is nothing stopping municipal and provincial governments from making side guard rules on their own. Our three levels of government may be wiping their hands of the issue, but any or all of them could step up and legislate side guards.

In the last couple months, both Boston and Montreal announced they want to install side guards on heavy city vehicles. The two cities found decking out larger vehicles with side guards costs between $1,200 and $2,000 per truck.

"I think it's clear that it's a very small price to pay to reduce the severity of collisions," HCC representative Ben Wedge says. "For that reason it is important that we install them."